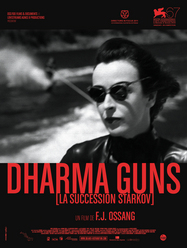 FJ Ossang new film, Dharma Guns, that was presented at the Venice Film Festival last september, is out in France this week. The name of the director, FJ Ossang, probably does not mean much to most French people, let alone foreigners. Yet this poet/director is well worth discovering for those fans of experimental cinema.

The one thing that has been missing in the French cinema, despite helping to produce such mavericks as David Lynch and Peter Greenaway, is a true visual experimentalist. Possibly because of its more literary tradition and Cartesian culture, the French cinema has mainly be grounded in a more realistic approach.
Obviously there have been exceptions: Raul Ruiz (but then he is Chilean born), Alain Resnais (although again, his surreal approach is more anchored in a literary tradition) and the grandfather of the surreal, Luis Bunuel (but then again, Spanish born). Do not mention Luc Besson and Jean Jacques Beinex please, whose approach of cinema is that of an 80's advert (and not in a good, retro nostalgic way). As for punk cinema, apart from Virginie Lespentes (Baise moi), I cannot think of anybody else.


So it is so refreshing that FJ Ossang has been carrying on with his craft and unique style for nearly 25 years now, as the true punk/poet of the French cinema. His 3 feature length films have been noticed in festivals around the world and by amateurs of the unusual, usually devoid of any conventional narrative thread, and with his trademark arty black and white. His style has been hailed as an unlikely mix of German expressionism, David Lynch and early 80's punk.


His latest, Dharma Guns, is about a amnesiac who lands in the Azores to meet some shady businessmen to hand them over a script. His condition leads him to constantly reassess what is happening around him. The trailer does not offer much clues to the story. Yet it is stylish, mysterious, and in black and white, so what more can we ask for? I hope this film will make it to the UK and US one day although I am not holding my breath! It met with raving reviews (from the medias that matter) and described as an extraordinary sensorial experience.