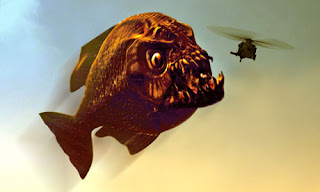 Synopsis: Some genetically enhanced piranhas go loose in the rivers of Venezuela, with Florida in their sights, like a bunch of voracious pensioners...
Review: The infamous Asylum studios, notorious for their cheap knock offs such as Transmorphers and Snakes on a train are back! Their previous effort, Mega Shark vs Giant Octopus, was high in concept but  lost some of its momentum along the way. 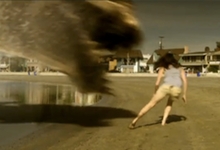 But this time they had kept the pace frantic and had the brilliant idea of taking their silly concept to the lowest depths of idiocy. What starts off as a cheap Piranha 3D knock off, turns into something else entirely as the piranhas keeps growing and growing, reaching the size of a house. Soon, they are salto jumping like demented cheerleaders before throwing themselves at buildings while exploding. (Why are they exploding? Don't ask silly questions please, giant piranhas explode on impact, everybody knows that) 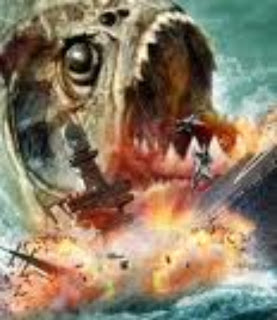 What I love about the Asylum studios is that they never pretend to be anything else that pure trashy fun, with a certain Ed Woods naivety and enthusiasm to them. Despite being all CGI, the piranhas still look like they are being pulled by strings. The CGI effects themselves look like they have been added with crayons at post production. Scenes of mass urban panic features 3 extras running and screaming with the conviction of a child startled by a butterfly.

And the director's attention to details is one of of ADHD teenager suffering Ritalin withdrawal symptoms: a car turns from to 4 by 4 to regular car yet again and changes colour within the same scene, and a scene with a reporter, allegedly set in Florida (and shot in Belize City), features some very prominent mountains in the background!

I cannot wait for the next effort! Let me guess, Gianormous Jellyfish vs Prehistoric Praying Mantis? And now for your viewing pleasure, some serious Piranha kick boxing! They can eat a house, but they can't resist an ageing B movie actor on steroids!