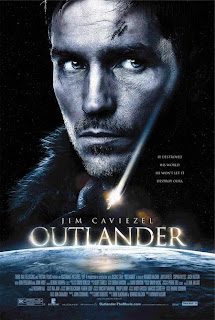 The pitch:
A man from another world (Jim Caviezel) crash lands on earth in the time of the vikings, bringing with him an unwanted visitor: a deadly beast that hitched a hike in his spaceship. Wary of the stranger, the vikings must side with him if they have any hope to defeat the invisible foe.
Review:
Concept is king in Hollywood at the moment. It seems that no film will be greenlit unless it has an exciting concept that can be sold to the audience in a few words. I can just imagine how the meeting to pitch Outlander went: "It's Predator meets Beowulf!"
Sadly, while this is an intriguing idea, the film never delivers on its promise. The main problem is the far too serious tone adopted. If you are going to have the preposterous premise of vikings fighting an alien, going for realistic and gritty is just not going to work, they should have had some fun with it! Shedding a good 30 minutes off the running time that clogs up the story would have helped.

The film ends up feeling like a mishmash of different genres, a bit like the creature itself is a mishmash of every single monsters ever committed to the screen (spikey, weapon-like tail, invisibility cloak...) and ends up looking like a giant toad with disco lights. Fun is to be had also at the most un-Scandinavian looking actors ever used to portray vikings in films, all sporting various (and variable throughout the film!) British accents.
Jim Cazievel, who always looks like he has just crashed down from outer space in any film he is in, should have been the perfect choice to play the outlander, and yet his charisma free performance is actually one notch below that of Keanu Reeves as the alien in The day the earth stool still (quite an achievement) He is not helped by a baffling flashback that actually makes you wonder if you should be rooting for the monster instead! All in, a missed opportunity for what should have been some trashy and harmless fun.
Rating: 4/10
Credits
US 2008 Directed by Howard McCain With Jim Caviezel, John Hurt, Sophia Myles, Ron Perlman...