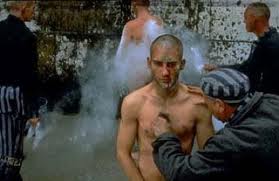 Max (Clive Owen), a seductive gay dilettante, spends his life in decadent parties in a Berlin torn apart by WW2, blissfully unaware of the horrors around him. They catch up with him however, and his boy friend is killed trying to escape while he gets sent to Dachau. There, he manages to makes himself pass for a jew rather than a gay man to avoid an even worse treatment. However, a growing love for an inmate (Lothaire Bluteau) gives him the courage to assume who he is, despite the consequences. 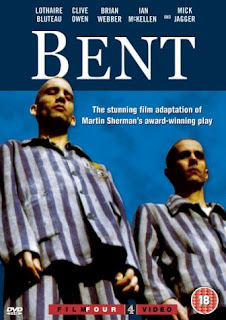 Review:
Some films are memorable but not always for the right reasons. I saw Bent at the Un certain regard section of the Cannes Film Festival in 1997, and while enjoyed the film immensely, I remember it for a particular reason. Shortly after I took my seat, a teacher and her students came in and sat just in front of me. They can't have been older than 15 and were making it quite clear that they were not looking forward to a boring history film, which made me wonder if their teacher knew what she was getting herself into.
The film then opened with Mick Jagger in drag, perched on a swing over a derelict factory, the venue of a particularly decadent party, singing cabaret songs. A few minutes later, Clive Owen was being brutally taken from behind by a handsome German soldier at an orgy in that same club. At that precise moment, the teacher stood up, and got all of her student to evacuate as quickly as she possibly could. If only she had read a bit more about the film beforehand... 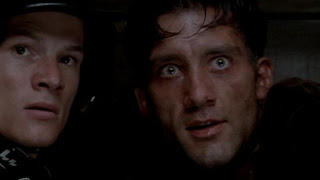 Watching it again 14 years later, the film has dated a little bit, especially in its first part, set in derelict factories/decadent clubs with extravagant extras, which makes the whole thing looks like an early 90's Derek Jarman video for the Pet Shop Boys. Plus I have always found that film that tried to be decdent always try too hard, the whole atmosphere feels a bit forced, like at a Shoreditch party staging a decadent Berlin revival.
But the second part set in Dachau has lost none of its intensity and its poignancy. The action solely takes place in a quarry within the camp where the two inmates are made to pointlessly carry rocks from one point to another to crush their soul, and the bare and stylised set, far from being distractive, actually adds to the intensity. Both Clive Owen and Lothaire Bluteau excel at showing their burgeoning love from under the eyes of the guards, taking every possible opportunity to catch a glimpse of each other, share a few words, expressing their feelings in any subtle way they can until the inevitable happens. By then, Max has gone into a metamorphosis, leaving his selfish personna behind and fully and bravely embracing his true identity.