Survival Of The Dead: Please Put Them Out Of Their Misery 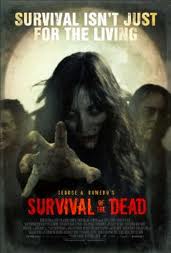 Survival of the dead is the last chapter in George A Romero's new Dead trilogy. And what a tragedy it is. When the zombie master announced that he was working on a new dead film back in 2004, as the zombie genre was going through a revival, with Shaun of the Dead and the Dawn of the Dead remake (that went to the Cannes Film Festival it has to be noted), fans all around the world where wetting themselves with excitement. And yet what a cruel disappointment it has been, made even more painful when each new film turned out to be even worse than the previous one. Survival of the Dead is , I am sorry to say, the final straw.


Land of the Dead was above average for a zombie film but still a lot less than you could rightly expect for the man who made such mastepiece earlier in his career . Still, there was his trademark social commentary and a few decent scenes.

The following one, Diary of the Dead, took a departure, starting off the whole zombie epidemic again as if it had just happened. And went seriously wrong in the process. Forget the impossibly ugly image, the terrible acting and cheap production values, there were so many baffling elements: the confused message about the internet (which might be a good thing or a bad thing, the director could not decide), the alcoholic English teacher who gives his students extra credits for watching horror films, the man wrapped in a mummy bandage for three days who never needs a loo break...


And on to Survival of the Dead, which picks up with some characters fleetingly met in the previous film. Elements of its storyline made me wonder if George A Romero had kept all of his mental facilities: some sort of Western featuring two feuding Irish families, human attempting to switch the zombies from human flesh to animals (including a discusting scene where the undead chomp through a horse!), and my favourite part, a weird plot twist involving two zombie/non zombie twin sisters that would have found a rightful place in the most surreal episodes of The Young and the Restless.

So gone is all the social commentary from they heydays of the serie, which is a shame considering how fertile the world is with issues to tackle right now, and inequalities and social unrest even worse than in the 70's.

`
But worse of all, the film is dull, incredibly dull. I could have switched it off at any moment and do not feel like I was missing out. I did not care about what might happen to any of the character. Hell I would have prefered to be watching Uwe Boll's House of the Dead instead, with its laughable slo-mo bullet time scenes, day-glo make up effect and 90's German techno soundtrack, which, at least, raised a smile.

What a strange and disappointing career George A. Romero has had, outside his first Dead trilogy. Apart from Creepshow and Martin, you would be hard pressed to find a half decent film in his filmography (and I am sorry but I cannot include The Crazies, have you seen it recently? Incredibly dated!). Do yourself a favour and avoid Survival of the Dead at all cost, how low can you go if it is even less enjoyable than an Uwe Boll film?