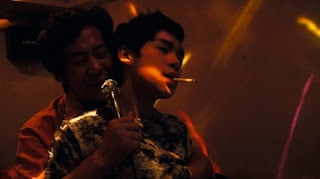 After yesterday's opening night, the London Film Festival started in earnest today. I decided at the last minute to switch from the afternoon screening of stinker opener 360 (what were they thinking exactly, putting it on the opening night, apart from the star wattage?) to South Korea's Stateless Things. And then this was followed by Chantal Akerman's Almayer's Folly. Both films were very slow paced and clocked out at over 2 hours, perfect to get me in gear after a summer of frenetic blockbusters and horrors. 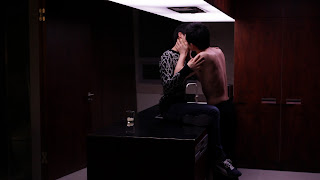 I had picked Stateless Things by Kim Kyung-Mook pretty much on the account of it being South Korean but this was very different from the sort of films we have been accustomed to. For once, nobody exacts a bloody vengeance upon anybody, how refreshing! While there is a lot to be admired, I was left me with mixed feelings. The film is split into two narrative threads which tie up in the most unexpected way.

First of all we follow Jun, an illegal immigration from North Korea, who struggles to make a living with a thankless job in a garage under an abusive boss, finding some solace with a fellow North Korean female co-worker, despite the threat of deportation they both live under. This first part has a really gritty and realistic tone to it yet the director still displays an impressive visual flair, never flashy but always assured. Then in the second part we skip to Hyeon, a young toyboy who lives with his rich boy-friend in one of those soulless and modern high-rise glass buildings, in a luxurious flat whose almost clinical design betrays the coldness in the relationship. The young man drifts apart, arranging random meets with other men while his older and controlling lover tries to salvage whatever is left of their union.

This is where the film begins an increasingly radical shift to the experimental, taking a polar opposite approach that what we had seen in the first half. We are treated to a whole lot of gorgeous and lingering shots of the two men, their appartment, the city, in the sort of cold yet beautiful cinematography that reminded me why I love big modern Asian cities so much. A few rather explicit scenes, shot in a crude video mode, are inserted now and then, as the two storylines collide and the story becomes less and less straightfoward, to the point where the whole ending left me completely puzzled.

This did remind me of Hou Hsiao Hsien's Millennium Mambo in its aesthetic form and with the theme of disjointed lives in a big city, which is not exactly groundbreaking any longer. There is a lot to admire formally but it is difficult to feel involved with any of the characters. And the tonal shift from gritty realism to experimental is rather baffling.


Interestingly, the second film I saw today, Almayer's Folly by Chantal Akerman, seemed to follow an opposite arc, from the experimental to the more linear. It charts the fall and fall of a Western merchant in an unnamed Asian country, whose ambitions for his daughter prove his downfall. 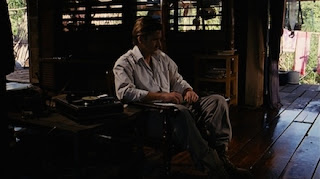 The film was introduced by the lovely lead actress Aurora Marion, who claimed that we were to either love this film or hate it. It pains me to say that I felt neither. This very loose adaptation of a Joseph Conrad novel starts off promisingly, in a rather experimental way and with some echoes of Tropical Malady and some intriguing dream scenes. Yet, as the story goes along, the film becomes more and more classical, to the point where the second half almost feels like a straightforward adaptation. The story becomes clearer, the style less inventive, and came dangerously close to dullness.

Tomorrow I shall be taking things to the next level, with four films back to back, 50/50, Hard Labour, You Betcha and The Day He Arrives. A comedy about cancer, a Brasilian horror/social satire, a documentary about Sarah Palin and a South Korean film about social awkwardness and alcohol, how is that for variety?
at 02:16