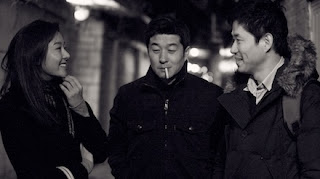 You would probably assume by the post title that today was not exactly a laugh a minute, but what a great, if butt-numbing day! It really feels like I have got into the swing of things at the festival now and I am looking forward to ten more days of this! So a busy day today with four films back to back. 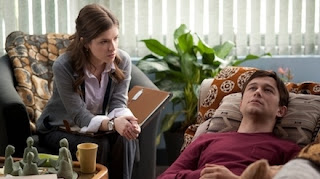 A dramedy about cancer with Seth Rogen as one of the two leads? I would have given this a wide berth if it was not for two elements. First of all director Jonathan Levine whose previous films were two very different and underrated gems: All The Boys Love Mandy Lane and The Wackness. And then Joseph Gordon-Levitt, who has become one of the most interesting and understated actor recently. In here, he plays a young man whose world crumbles when he finds out he has cancer, with a 50/50 survival rate.
One of the best idea about the film is to have used a young, and fairly average man as the protagonist with the disease, somebody you would expect the least to be affected by it. And the film is not offering us a soppy, inspirational, saccharine filled story. Instead, it is more interested in showing how such a life shattering event forces him to re-examine his relationships with his girl-friend, best friend and family. It does not try to make him come out of this as a better person, he gets depressed, angry, he gets unfairly stroppy with the ones around him who love him... he is just human! And Jonathan Levine manages to find the perfect balance between drama and comedy, helped with a fantastic cast. Joseph Gordon-Levitt gives a wonderfully understated performance, and there is some excellent support from Anna Kendrick and Anjelica Huston.
The only bum note is Seth Rogen, as a loud-mouthed, womaniser who hides a heart of gold. I realise this is how his character was written but I found him obnoxious and extremely self-centered, and the smirk and smug face of the Green Hornet "star" makes you want to reach for a hammer to smash the screen whenever he appears. Nevertheless, there was not a dry eye in the screen this morning (this is not a spoiler by the way), and the film is a great achievement, especially considering how wrong it could have gone with a bad director. 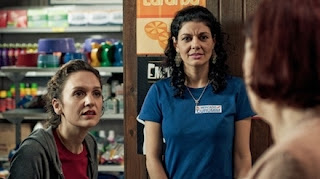 Following a recent trend of South American genre films, this Brazilian film promised to be a social satire/horror. In it, a middle class woman opens up a new minimarket just as her husband looses his job. The already stressful situation gets worse when strange things happen: items disappear, odd sounds are heard, markings appear on the walls...
I have to admit I was a little let down by this at first. Part of the reason for this is that I was expecting a more straight forward horror and this surely is not. Do not go in there expecting some big and scary finale or even any violence at all, physical anyway. But now that I have been thinking about it I realise that I have enjoyed it more than I thought. First of all the direction is extremely assured. The cold cinematography and the excellent sound design worked well together to create a very tensed atmosphere. There are no cheap jump scares yet it does not stop the film from having a couple of chilling scenes.
But more importantly, it is also a damning satire about class war. And the best idea of the film is to have made the lead a truly middle class woman, right in the middle of the food chain, instead of a mere victim at the bottom of it. She lives a seemingly comfortable life, yet we quickly realise how fragile it all is, as her husband soon finds himself unemployed. She gets more and more unsympathetic throughout the film, and the tables are turned when she is forced to act with her employees and her maid in the same harsh manner her husband has been treated at work. He, on the other hand, suffers the traumas of unemployment in an increasingly cut-throat corporate world, and has to go through one of the most cringe-worthy self help/team building seminar scene I have ever seen.
One of the directors came on stage for a short Q&A and confirmed that the intention was not to make a traditional horror. In fact, he even explained a backstory for the strange events that happen in the film, that has been deliberately left out of the final cut, I will not spoil it but it was probably for the best, as it would have completely jarred with the rest of the film. 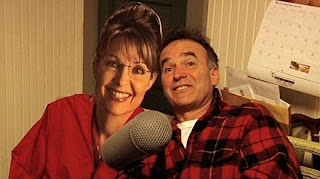 Make a documentary about everybody's least favorite Tea-Partier and American religious extremists, and you are guaranteed to have a mostly liberal and European audience roll in the aisles. Indeed this documentary about Sarah Palin felt a bit too easy, even falling into the pitfalls of the Michael Moore school of documentary, with co-director Nick Broomfield putting himself forward a little too often. Plus the film will suffer from one major event: the Alaskan nutjob has actually decided NOT to run for presidency in 2012 after all. What must have sounded like a fantastic marketing opportunity has now turned into a nightmare for those task it will be to sell it to an audience.
Yet I did not find it without some merits. For once, it is easy to forget that behind the facade of a slightly dim and almost harmless C-List politician, lies an awful woman with near psychopathic tendancies. Unable to interview the woman herself, the director has gathered the testimonies of former friends who have now speaking out loud about her, after she virtually turned on all of them if they had the audacity to disagree or simply get on her way. Her view of the world is as scary and manichean as George Bush Jr's infamous line: If you are not with us, you are against us. Although her political career seems now over, it is hard to imagine how far this woman managed to go.
And she still remains some sort of enigma. What exactly motivated her? It was not power as such, as soon as she won any position of power, such as mayor then governor, she soon lost interest, busy as she was texting on her two blackberries during important meetings etc... It is not even a political or ideological motivation, as we learn she passed a bill to increase tax on big oil companies, which sounds completely insane from a presumably Republican person. I guess we will never now and she will soon start fading into obscurity. If anything, this documentary will serve as a reminded of how close we came to disaster. Like somebody says at some stage, imagine her in charge of nuclear weapons?
The Day He Arrives 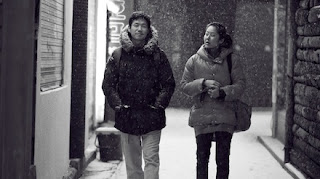 I have to admit that despite my love for Asian and especially South Korean cinema, I had not seen any film by Hong Sang-Soo. All I know is that his films were all about relationships and usually feature a whole lot of drinking and eating scenes, which is far from the usual bloody vengeance and dramas I had been accustomed to.
His latest had been intriguingly described as an art-house Groundhog day, with a film director spending a few days in Seoul visiting an old friend, only for the same scenes seem to be played out over and over again with sometimes subtle, sometimes wide variations. It is never quite clear what we are actually witnessing, although the gorgeous black & white, far from feeling gratuitously arty, might actually give us a clue: are these scenes memories from the director's previous life that he is mentally altering? Are these figments of his imagination that are soon to be put into a new script?
What is certain however is that we are presented with a wonderfully understated masterpiece, a subtle study of relationships, memories, regrets... Hong Sang Soo has a deft hand at presenting multi-dimensional characters in deceptively simple yet truly affecting and thought-provoking situations, and, confirming his reputation, the film feature an incredible amount of food and alcohol in a social context. I have always seen South Korea as being the Italy of Asia, based on its cinema, full of life, passion, revenge, blood, and in this case, food and alcohol. This turned out to be by far the best film out of the six I have seen so far at the festival.