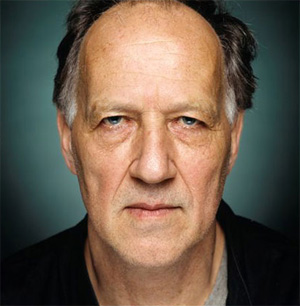 News have emerged of some truly inspired casting today. Maverick German film director Werner Herzog has just been cast as the villain in Tom Cruise's new film, One Shot, to be directed by Christopher McQuarrie (scriptwriter of The Usual Suspects). Anybody who has ever seen the frankly crazy German director of Fitzcarraldo, Aguirre and more recently, Bad Lieutenant: Port of Call New Orleans being interviewed will know full well that he is scary enough in person to make this choice rather logical after all.

Besides, it is not the first time we have had a rather left field casting choice involving a director: we did have Orson Wells doing the voice of the planet devouring decepticon Unicron in The Transformers, the animated feature length from the 80's. (Watch it if you have never seen it, it has robots folk dancing, beats anything Michael Bay has ever come up with).
Plus Werner Herzog is a man who truly feels no fear. He has worked with Klaus Kinski several times. He has worked with grizzlies. He has worked with Nicolas Cage (and elicited one of the best CageRage performance ever out of him!). He made a film about a madman building an opera house in the middle of the Amazonian Jungle (Fitzcarraldo) He was even shot live on TV a few years ago, while doing an interview with Mark Kermode for the BBC, and took the shot without as much as as flinching. Only when he began bleeding did the interviewer realise what was going on!

This makes me wonder, has Hollywood spinned the wheel of villains nationalities as it does every decade or so? We have always had the Brits, the stiff upper lip, the air of superiority, the accent, the prissiness, they are timeless and above any real competition really. We had the Russians in the 80's, the, aherm, terrorists in the 90's/2000's, with rogue Eastern European villains making their return around that time also.

So it was time for a change. After after Christoph Waltz nabbing every single bad guy role under the sun since his fantastic performance in Inglorious Basterds, now comes Werner Herzog. Perhaps this new decade belongs to German/Austrian bad guys? Is it retribution for unleashing The Hoff on their pop charts?
at 22:54