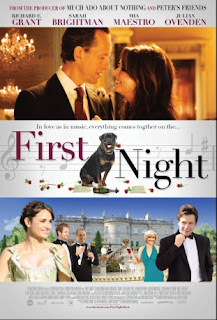 Taking a nice break for the madness of the London Film Festival, I wanted to put the spotlight on a delightful British film that is coming out this week end, First Night by Christopher Menaul. In it, Richard E. Grant plays a wealthy industrialist who decides to stage an opera in his country house, bringing in a cast of youthful and talented singers as well as a female conductor he had his eyes on for quite some time. As the rehearsals take place, dramas unfold and passions sizzle.


You could be forgiven for never wanting to watch a British romantic comedy ever again after the last decade saw Richard Curtis (Notting Hill, Love, Actually) single handedly ruin the genre, with a dreadful serie of films that lacked any kind of wit and class. And we certainly cannot look across the pond for any inspiration, where rom-coms, more than any other films, seem churned out by marketing panels to appeal a certain demographic. Yet this is the first quality of the film that it feels completely at odd with the drivel the genre has got us accustomed to recently. Romantic comedies do not have to be so wretched and crass, and in fact, with its blend of art and passion, First Night feels like the kind of film you would expect the French to make.

Another strength of the film is that it never looks down on its audience, and indeed there is no need to be an opera lover to enjoy it. The director himself was no opera specialist before the shoot, which explains why the film feels more accessible to a mainstream audience. Having shamefully watched less than five operas in my whole life, I still particularly liked the way the opera is skilfully integrated within the film. Indeed, the opera that is being performed, Mozart's Cosi Van Tutte, with its themes of infidelity and plot developments is a perfect fit. 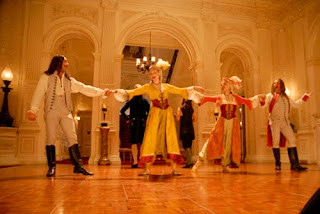 Finally, the assured direction and great production values ensure that this soars above the sort of made for TV film that would have the quality entertainment label slapped all over it. A couple of highlights include a beautiful scene at night that sees new liaisons form and passions flare up in the surrounding gardens under the shadow of the moon, and the dress rehearsal scenes which feel just as lively and full of energy as the opera itself. All throughout the film, the camera flows all around its characters without ever feeling flashy.

Some unfortunate souls among you might have seen Meeting Venus, a terrible rom-com/satire also set in the world of opera and starring Glenn Close, whose memory made me appreciate this film even more, as everything that wrong with that europudding is mercifully avoided here: no static camera, dodgy dubbing and baffling slapstick.

But of course, this sort of ensemble film would be nothing without a great cast and thankfully it does rise to the challenge. The too rare Sarah Brightman (last seen in cinemas in Repo: A Genetic Opera), ironically in a part that involves hardly any singing, and Richard E. Grant in the male lead, make a wonderful screen couple, with a great chemistry and tenderness. Particularly impressive is the way their past tumultuous courtship is merely evoked thanks to their acting without the need of a back story to explain it.

This is however an ensemble film and nobody in the cast ever feels neglected, thanks to a script that give them all an opportunity to shine. While largely unknown, the actors impress, with a special mention to Julian Ovenden as a sprightly and ambitious young tenor.

A great romantic comedy in the proper meaning of the term, that feels grown up and sophisticated and that is so full of life, passion and style, what is not to love?

First Night is out this week end in the U.K.