The highs and lows of film festivals. While deciding which films to see, with sometimes nothing more than a picture and a quick blurb, you just have to take a chance. Sometimes it pays off, sometimes it backfires dramatically. So it was a case of reaching dizzying heights yesterday only to fall into a bottomless pit of abjection.


Being a half full type of guy, I will start with the worst film of the day, and of the festival even. Let The Bullets Fly, or Let The Bullocks Fly like I called it, promised to be, if anything, a slightly silly but entertaining Chinese action/comedy, with some big names on the cast: Chow-Yun Fat and Ge You (the man who best actor in Cannes 94 over John Travolta).

It has to be said that the combination of a week long non stop binge drinking and film fatigue might not have made me as receptive as I should have (but then I had no problem with the slow paced Ostende the day before). And within minutes I was hating this. With a passion. The sort of hate that makes you want to stab your eyes repeatedly to numb the pain. (No need to stab my ears, nothing could have stopped the infernal and incredibly loud cacophony) 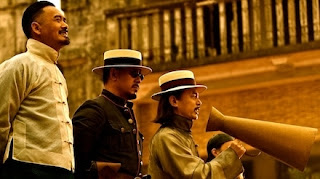 Set in the 1920's, the film follows a bandit, a conman and a warlord as they vie for the control of a small town rich in bribes and taxes. So what is so wrong with it that I had to walk out after thirty minutes?

Try everything. Except for the first five minutes possibly, as a train is being ambushed, in a scene that had more than a passing resemblance to the opening of South Korean western The Good, The Bad, The Weird. But then after that, it sunk into a unpalatable mixture of slapstick "comedy" and cartoony violence, that had me running for the nearest exit. I love over the top cinema, I love silly humour, I love cartoon and slapstick violence, yet in here it does not work at all. The violence is actually rather sickly, the "humour" is unfunny, the story mightily complicated and I just could not offer it any more of my time after half an hour.

Fortunately, earlier in the day, I had seen my favourite films of the festival, and one of the most enjoyable in a long time: Nobody Else But You (or Poupoupidou, its original and much more fun French title). 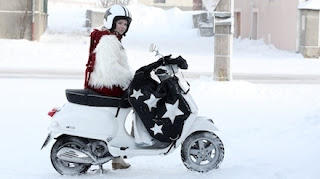 The film is sets in a snowy French village, home town of David Rousseau, a crime writer who have just travelled back from Paris and ends up staying longer than expected when the body of a local blonde weathergirl/model, Candice Lecoeur, is found in the snow. Unwilling to believe to a suicide, as hastily concluded by the authorities, and looking for inspiration for a new novel, he decides to investigate, despite the hostile local force. Having got hold her secret diaries, he unravels the circumstances leading through her death as her life is evoked through flashbacks.

This might sound like an unlikely mix, or a recipe for disaster even: take elements of Twin Peaks and Marilyn Monroe's life, stitch them together, and voila! And it works. Mainly because, on top of offering us a very entertaining whodunnit, the director is just as much interested in the portrayal of the town inhabitants through subtle brushes, and gives us a whole gallery of characters that we care about.

But what elevates the film above a mere playful thriller is its heart. Candice Lecoeur is a profundly touching character, whose voluptuous body, naivety and big heart were always going to mean a life of tragedy, and Sophie Quinton as Candice gives a wonderfully nuanced performance that perfectly conveys the character's contradictions. There is something rather moving about the relationship between the writer and her, even if, like she says herself from beyond the grave, only when she died did somebody worthwhile finally took an interest in her. 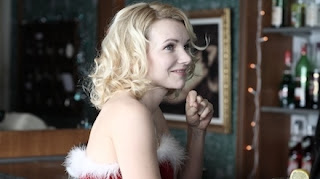 It has to be noted that the film will be a particular joy for Lynch fans as it is literally peppered with references, some more obvious (all the links to Laura Palmer), some more subtle (the song played at a funeral is a cover of "This mortal coil, song to the siren", that was used in a couple of key scenes in Lost Highway). And the connection does not end there. Sophie Quinton as Candice, played the lead character in another French thriller, Qui A Tue Bambi?, which had the Eraserhead director as an obvious artistic influence.

And, as a treat for film fans, Atom Egoyan's muse, Arsinee Khanjian, turns up in a small part. Her unique and distinguished appearance, as well as her very unusual delivery always makes it a pleasure whenever she appears on screen. If films were drinks, she would be a mature whisky, which makes any drink it is added to a lot more interesting, even in small doses.

And that was it for a few days as I fell victim of the much feared festival bug. Packed cinemas are only second to chicken slaughterhouses in the scale of germ attacks, and illness meant I had to skip a few films. I still managed to make it to the Surprise Screening earlier which turned out to be... (Answer on the next post!)
at 01:44