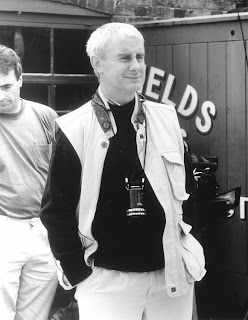 As per my review, British romantic-comedy First Night, which just came out in the cinema, turned out to be a great surprise, a classy and immensely enjoyable film that is miles away from your average British or American rom-com. So I was keen to find out a bit more about it and below is my exclusive interview with the director Christopher Menaul.

While this is only his second film for the cinema, the British director has some done extensive work for TV, with highlights including The Forsyte Saga (2002), and the BATA winning See No Evil: The Moors Murders (2006). Interestingly, he started work on First Night right after finishing this film about Ian Brady and Myra Hindley, so it must have been one hell of a transition! I was intrigued to see that he has also directed a TV movie about the philosopher Ayn Rand, starring Helen Mirren in the lead, and THAT is something I would love to see! But back to First Night and the interview:

1) First Night is very different in style and tone from the majority of British romantic comedies of the last decade, and feels more grown up and sophisticated, the sort of film you would expect the French or the Italians to make. Was it a conscious decision from your part, and if so, what films have influenced you?

Absolutely. I'm not a big fan of British and American Rom coms. I particularly like the French approach, HEARTBREAKER, for example. I'm not aware of any recent Italian Rom Coms; at the moment  they seem to be better at Grand Passion eg I AM LOVE (wonderful) or political thrillers like IL DIVO. But Altman was the biggest influence, see below  4.

2) Was it easy to convince Sarah Brightman to join the cast, especially considering that she has made few films in her career?

There was no problem there; she was and is very keen to do more film work. She told me she was delighted not to be singing in the film as she wanted to concentrate on the acting. And I liked the irony of having the one performer famous for her singing playing the conductor! But, after the end of Principal Photography, at the first cut stage,  we decided we couldn't have her name on the film and not have her sing at all. We might be prosecuted under the Trades Description Act! So I wrote the little scene in the church and she came back and we did it.

3) How about the rest of the cast, most of them had to be able to both sing and act, did you hire actors who were be able to sing (even if subsequently dubbed), or opera singers who could act, and why?

We considered using opera singers. The producer was initially keen to do so and we interviewed some. But in the end Stephen agreed with me that (a) it did not give us a big enough acting pool to fish in and (b) even if we could cast the picture to our satisfaction with genuine opera singers their availability for the period required would be a huge problem. (Because of the ensemble nature of the story we couldn't bring people in and shoot all their scenes in a few days; a further problem was that 70% of the shooting was up in Scotland.) So we went with actors but  insisted they must be able to sing and auditioned them to make sure that they could. A couple of very well known actresses wanted to play Nicoletta but backed out in the end because they didn't feel they could manage the singing. Even though we always intended to replace their voices with professional opera singers we felt that if the actors were really singing (and to an audience: the crew and the rest of the cast) they would look much more convincing. We actually had a screening in Havana before post production was completed with the actors still singing in their own voices and it went down very well.

4) One of the pleasures of the film is the great ensemble cast you have put together, and how you have managed to give each of them an interesting part. Again, were you influenced by some classic "ensemble" films before the start of the shoot?

Well, thanks, obviously some of that comes from the writing but I encouraged the cast always to offer up alternative or additional dialogue, some of which I used. As you know, most rom coms are constructed round a basic triangle. I wanted to make a multi stranded story more like Altman's NASHVILLE or a A WEDDING and I tried to create  multilayered dialogue in the ensemble scenes in the way he did so brilliantly.

5) There was a romantic comedy/satire about the world of opera made in the early 90's, called Meeting Venus, with Glenn Close, one of those infamous "europuddings" that were popular at the time, (and a terrible film in my opinion). I was wondering whether you had actually seen it and if so, what you thought of it?

I actually went to the premier, because I was working with David Puttnam at that time, directing another film. I think it's safe to say that neither David, nor Istvan Szabo, the director, who have both made some terrific films, would regard it as their finest hour. It influenced me insofar as  Glenn Close miming to playback looked so unconvincing that I was determined to go down the road of getting actors who could sing and then post dubbing them rather than prerecording the music and having them mime.

6) The film is very enjoyable, even for non opera fans. Do you think the fact that you were no opera specialist before the shoot has helped you make the film more accessible to a wider audience?

I hope so. I brought a very talented musical director, James Morgan, in at the very beginning to help me on that front. I picked his brains mercilessly while I was writing the four drafts of the screenplayI did between 2006 and 2009 when we finally shot it. And he rehearsed the actors in their singing for three weeks before we started shooting (and my wife, Kathleen Mackie, worked with them to create the choreography  that Philip devises in the story). Both were present whenever I shot musical scenes and were invaluable.

7) The opera that the troupe performs, Cosi Von Tutte, is a perfect fit as it mirrors some of the film's theme and storyline. Was it the only opera ever considered or were there other choices?

It was certainly the only opera I ever considered and the story's plot riffs on the opera's without duplicating it. The working title for the film was Cosi but we felt that would mislead audiences into expecting a film of the opera. Other titles considered were Getting it on and Sizzle, which personally I prefer to First Night.

8) The script was originally written by Jeremy Sams and then you came on board and did a number of rewrites. Considering that Jeremy is originally a composer and this is his first script, how much work did the original script need, and how significant was your input?

I only took on the film as a director (in February 2006) on the understanding I could do a radical rewrite of the Sams script. Because of the difficulties with finance I ended up having three and a half years to do four drafts so it changed enormously. The whole opening of the film with the auditions and Sarah singing are new, the character of Paolo Prodi doesn't appear in the Sams script, nor any of that story strand in which Tom lies about working with him and is then hoist by his own petard when Nicoletta gets her revenge for the bet, nor the offering of the big break which Tamsin finally gets and the counter offer to Nicoletta that she should return to Prodi in Milan. Nor Adam mistakenly telling Tom that he loves Celia thinking it is Celia and his subsequent belief that Celia and Nicoletta are lovers. Nor the running gag with Tom and  the dog and the final resolution of the missing phone. Celia winding Tom up to sabotage his date is new, as is the big Smiles on a summer night walk in the forest sequence. The Eric/Bernie/Mrs Hammond/Debbie characters were in the original script but I developed and resolved their stories. I did take some scenes from the Sams script which were good: eg the restaurant scene and the "use her tits, Martin" rehearsal scene.

9) You have mainly worked for TV in your career, how much has the British film industry changed since you made your first film for the big screen, Feast of July, back in 1995? Has financing become any easier?

Feast of July was a Merchant Ivory production with Disney financing and distributing so it was a different, much easier business. It was always hard to get independent films made. I developed four in the nineties, none of which happened. But it's become even harder. We originally set up First Night to go in the summer of 2006, cast it, crewed it, found locations--and the money collapsed. Exactly the same thing happened in 2007 only this time we were days away from shooting. I took 2008 off to do a Lynda La Plante tv movie to get some money in the bank. Then we tried again in 2009. We rehearsed the singing and movement for three weeks in London, then moved up to Scotland with a full feature crew and all the cast, shot for two weeks and it happened a third time! The whole production was shut down for 12 days (as it turned out, but we had no way of knowing at the time it wasnt terminal). Cast and crew went back to London, production and myself stayed up in Scotland--rewriting and rescheduling day by day until the Producer finally locked the money in and we could resume. But you can imagine what that did to the budget and the schedule....It's a tribute to Stephen's tenacity that we finally did get the money to make a film like this. And to all the HODs who signed on three times to do the film (and turned down other work) before we finally did it.