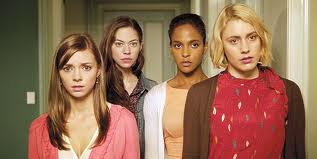 The hottest ticket in town for the London Film Festival was not the W.E. premiere last night, with the media scrum surrounding Madonna's appearance on the red carpet. (She managed to alienate all her fans by not taking the time to sign a few autographs, nice work). No, those of us in the know had paid to see a film not knowing what it was going to be! Such is the allure of surprise and our playful nature that we were willing to go wherever artistic director Sandra Hebron was going to take us, and indeed the Surprise Screening of the festival is its fastest selling ticket.


The last two years were disappointing: Capitalism, A Love Story then Brighton Rock were hardly exciting picks. And it is almost an impossible task, find a film whose studio will be happy to give it a secret slot, shunning any kind of publicity, and find one that is surprising and exciting enough, to satisfy an incredibly demanding audience. So for her last year at the festival, it seems that Sandra Hebron decided to follow her heart, and pick a film that she really, really liked. She came on stage, almost apologetic, and addressed the almost unbearable burden of expectations, warning us not to expect a big film, that some would hate it, but to give it a chance.

And unlike previous years where we had to wait for the credits to roll to get some clues, an unfortunate BBFC rating board gave it away, straight away: Damsels In Distress by Whit Stillman. 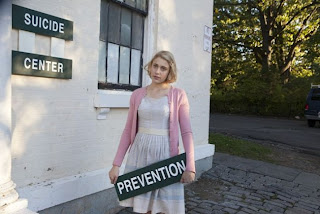 And in what will remains as one of the most divisive pick, the Surprise Film turned out to be... The director had all but vanished after a promising start in the 90's, with such films as Metropolitan, Barcelona, and my favourite of his and on my top 20 of best films ever: The Last Days Of Disco, so I already knew we were in good hands.  But a quick look at Twitter after the screening showed that it had split the audience evenly into lovers and haters.

In Damsels in Distress, sorority newcomer Lily (Analeigh Tipton, whose unusual and elfish beauty has already graced Crazy, Stupid Love this year) joins a trio of girls, lead by Violet (Greta Gerwig), who have set themselves the mission of assisting their fellow students, through various and unusual methods: a suicide prevention centre, a new dance routine and the underrated psychological benefit of a wonderfully scented bar of soap.

This has been described as an indie and high-brow Clueless, and there are similarities in the story, even though Clueless was already a much smarter film than expected. Sandra Hebron was right, it truly is a love it or hate it with this film, thankfully, in my case, I loved it. Indie comedy is a very tricky genre to pull off, polluted that it is by pretension, fortunately in here, it works.

Just like with his previous films, what sets Whit Stillman apart is his gift to make his incredibly witty script come across as light, natural and amusing, but never pretentious and knowingly self conscious, while eliciting some wonderful performances from his great cast. 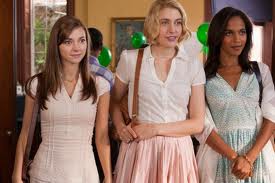 I usually hate the Q word, but there is a wonderful quirkiness at play here, and it works because it is played completely straight, deadpan even. And in something of a departure for the director, there is here an added surreal and dark sense of humour that fits his universe very well. There is no strong narrative drive , just like his previous film, The Last Days Of Disco, this is more of an ensemble film, with echoes of Woody Allen and Eric Rohmer. The dialogues are so incredibly hilarious that I would happily sit through it again to try to take on as many classic lines as I possibly can. I will not quote any as out of context, they would fall flat and I do not want to ruin them anyway. Let's just say the mere mentions of playboy operator and Sambola are guaranteed to give you a chuckle once you have seen the film.

Like I was saying, the cast is uniformly excellent, lead by the wonderful Greta Gerwig (Greenberg, The House Of The Devil), who currently reigns supreme as the queen of mumblecore. She might run the danger of always playing the same character over and over again, but I have never seen an actress able to express so much through so little facial expression. As a uber-neurotic yet always likeable character, she is a pure joy from start to finish. You will be pleased to know that she does not get her head blown out as in The House Of The Devil, a scene that has scarred me for life.

If there is a very slight mishap, it is the ending. Whit Stillman seems to have struggled to find a way to end his story, and felt the need to conclude it with a couple of dance routines that fall into the stereotype of whimsy quirkiness he had so skilfully managed to avoid. But this is only a minor reservation, and I wholeheartedly recommend this gem of a film. No release date has been set yet so watch out for it.
at 00:18