The Battle of the Snow Whites: Julia Roberts Is An Evil Queen 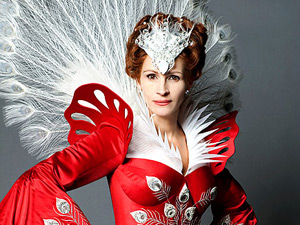 2012 will be the year of the Snow Whites. In March, Tarsem Singh's version, called Snow White (or Untitled Snow White as credited in IMDB), will come out first, featuring Lily Collins and Julia Roberts. And then in June of the same year, it will be the turn of Snow White and the Huntsman by Rupert Sanders (who?) with Kirsten Stewart and Charlize Theron. Why would two studios choose to release two similar film so close to each other? Yet again should I add.


Indeed this is nothing new although it has been a while since two high profile films based on similar material have gone head to head. Twenty years ago, it was the battle of the Columbus with Ridley Scott and Gerard Depardieu in one corner, and Christopher Columbus: The Discovery, with Marlon Brando (having achieved his final incarnation as a Haagen Dazs tub) and George Corraface on the other. They both flopped by the way. And just before that we had Dangerous Liaisons by Stephen Frears with John Malkovich and Glenn Close which, despite a smaller budget and a lesser known director at the time, was a clear knock out winner over rival Milos Forman's Valmont with Colin Firth and Annette Bening.

On a recent visit to France, I was made aware of an even more ludicrous situation, where a classic of French literature, La Guerre Des Boutons, had two film adaptations coming out within a week of each other, and both looking quite similar, none of the two productions having backed down.

So why does it happen? Obviously putting films together is anything but a straightfoward business. So many projects spend years in development hell, so many others get dropped all of the sudden... And when a film is finally set to be made, very few producers will want to back down after spending money on a script and all sort of development, even if it emerges that a competitor is well on its way. Besides, it can perversely becomes a bit of a marketing coup, with the rivalry bringing some publicity to both films. In this case, the two Snow Whites do look so very different, that the similarity of their source might not even register for the audience.

Untitled Snow White is directed by Tarsem Singh, a director with a fantastic and unique visual flair. Still, as much as I have enjoyed his films, he has yet to show that he can carry a story, and the words style over substance often spring to mind with him. His first film, The Cell, with Jennifer Lopez, under the cover of a run of the mill sci-fi tainted thriller, had some of the most intriguing visuals ever committed to screen, chaneling the influence of such diverse contemporary artists as Damien Hirst and Pierre & Gille. His second outing, The Fall, was a cruel disappointment for me, a fairy tale of sort, which suffered the ignominy of looking like a 90's British Airways advert. 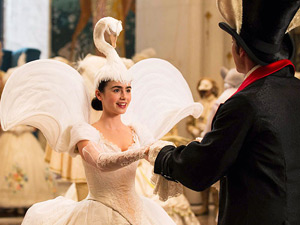 Yet I still have faith. His version is said to be more akin to a fairy tale, in a magical and otherworldly kind of way, which suits him well as his imagination knows no bounds, and the few pictures released reveal some wonderfully inventive costumes and set design. Julia Roberts as the Evil Queen should be a treat in particular. She does not look particularly evil in the pictures so far but she has this ability to do gleeful evil so well (watch her in Confessions of a dangerous mind if you have any doubt) and only her could pull THOSE costumes, I particularly love the peacock feather red costume. Snow White's swan dress however, has been so obviously ripped off from Bjork outfit at the 2001 Oscars, all we are missing is the egg handbag! 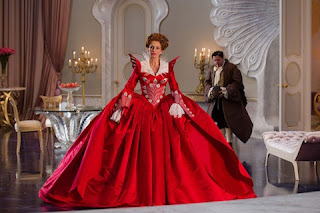 In contrast, Snow White and the Huntsman seems to have gone for the Twilight audience (having even nabbed Kirsten Stewart in the lead) with a darker and grittier tone and a more down to earth approach, throwing in hunky Chris Thor Hemsworth in the mix. It might sounds like a safer commercial bet but I have one thing to say to that: Red Riding Hood, which will we hear about again once the Razzies nominations are announced.
at 23:24