DVD Catch Up: The Hole. Definitely Not For Kids! 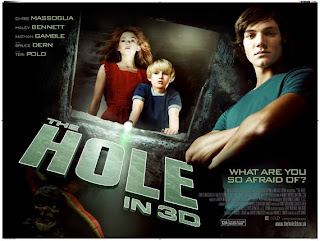 Plot: Divorced mum Susan (Teri Polo) moves in a new suburb with her two sons, who quickly realise that in their creepy new basement hides a seemingly bottomless hole, which, once open, unleashes some very dark forces.

Review: American director Joe Dante is best known for his early work, Piranha, The Howling and especially Gremlins. He might have have had not the career some had promised him on the strength of his first films, but has nevertheless always been interesting, making such underrated gems as Matinee and Small Soldiers. One of his most distinctive characteristic is the way he has always managed to put on a very dark spin on seemingly harmless "family" films, never looking down on his audience no matter how young or old.


The Hole sunk into the even more unforgiving hole of the worldwide box office, despite the 3D attraction, at a time when it still meant something (2009, remember?), and despite a rather attractive and engaging trailer. (In fact, I do not seem to find any evidence that the film ever came out in the US at all, can anybody confirm this?) And when I finally caught up with it, I was merely expecting an above average entertainment with Joe Dante's usual twist. 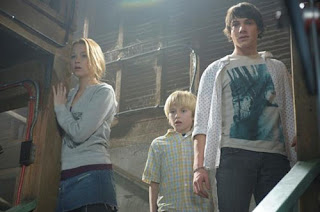 Yet I can now completely understand its lack of business as, while being an excellent film, it is incredibly dark and one that would not have been easy to market to any audience! Too kiddy looking for a mature audience, too dark for a family audience, it was one of those films that seemingly set to please very few, and kudos to the producers for even greenlighting this.

While the studio still took the easy route of presenting this as your average family entertainment in the marketing, it is nothing of the sort, not in the traditional sense of the term anyway, bracing some very adult themes head on, in a way that would have been quite disturbing for the little ones.

The misleading trailer does not really give it away but it becomes quickly obvious that the film is not going to be your usual tweenie scary film. In here, the young child and his older teenage brother are not the wisecracks annoying characters from the "Malcolm in the middle school of how every American family should be represented" you would expect them to be, neither is the pretty girl from next door who joins them. No cheap jokes, no stereotyped and cuddly moments, the whole atmosphere is in fact, unusually subdued. 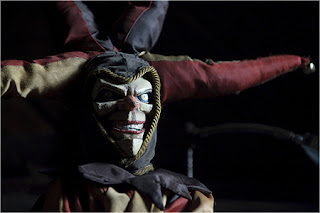 And as they are soon forced to face some rather dark events, the hole becomes a metaphor for a whole lot of unpleasantness: deep rooted fears and the repressed memories of personal dramas. Early scenes featuring a suitably nasty and creepy clown puppet are terribly unnerving, especially when said clown tries to murder the younger brother in any brutal way he can. Their neighbour does not have the best of time either, literally faced with her own demons, the memories of a tragedy that has been haunting her ever since. In this respect, this is when the film reminded me the most of Gremlins, which featured similar scenes of violence pushed as far as a family film can, as well as the infamous Phoebe Cates' tale of her father demise on Christmas day.

But while Gremlins was wrapped in a fuzzy, feelgood feeling, this goes even further, bringing in some disturbing elements of child abuse and domestic violence, as the protagonists fall in the hole (with its Beetlejuice/Dr Caligari inspired design of deformed perspectives) and face even more than they had ever bargained for.

Scarier than most so called horror films I have seen recently, and darker than any "family" film has any right to be, this truly is a return to form for the Gremlins director. A real shame then that the film was so cruelly overlooked upon its release.