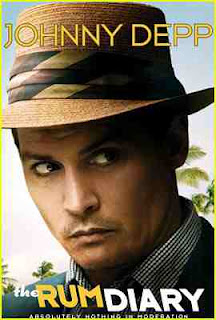 Plot: There is not much of a plot. If narrative threads were fireworks, then somebody forgot to light them up. Ok so an American journalist accepts a freelance position in a failing paper in San Juan. He gets exposed to colourful local characters and empties his hotel room's minibar.

Review: While coming out 13 years later, The Rum Diary can actually be seen as an indirect prequel to Fear and Loathing in Las Vegas, being an adaptation of an earlier book by Hunter S Thompson. Fear... was a flawed but minor classic, best remembered for the, well, fearless performance of Johnny Depp as well as the usual visual fireworks of Terry Gilliam. It was messy, made little sense and was no patch on the book but at least it was crazy and fun.


So on to this new adaptation, which must hold a special part in Johnny Depp's heart given his close friendship with the late writer. Chartering the earlier years of the gonzo journalist, it would have been a mistake to expect the same mayhem as with the Gilliam film. In here, the American actor plays a much more subdued, naive even, version of his character, who already has more than a drinking problem and dabble with drugs, but is not quite filled with the constant paranoia and hallucinations (bar a timid and unconvincing scene).

I have to admit to have been particularly baffled by this film. I was hoping for great things, given the acting talents involved, and the return of director Bruce Davidson (best know for making British student cult classic Withnail & I, and who hadn't directed anything since Jennifer 8 nearly 20 years ago). Yet this turned out to be incredibly dull, so dull I had drinks of water that were more exciting. In fact, I had more fun during the Muppets/Orange 2 minutes advert before the film than the whole two hours this sorry affair took.

The main problem with it, as I said before, is the lack of plot. For a film called The Rum Diary, you could forgive it for being episodic. But how frustrating was it that no storylines was ever developped, as if the writer/director lost interest every time and moved on to a new idea. Most representative is the entrance of Aaron Eckhart as a slimy and well off land developper, with a gorgeous girl-friend who you know will cause mayhem between the lead males. You logically expect his character to become the villain of the piece.

Except that, despite being let down and nearly betrayed by the pesky journalist he thought he could manipulate, and seeing his girl-friend snatched away, he ends up being a much weedier man you would have thought, and kind of gives up and walk away. Erm, that's it? And apart from a couple of tussles with the locals and the police force, there never seems to be any sense of peril and barely any conflict.

In fact, this nearly made me wonder why the film had ever been made in the first place. What was the intention, what compelled all these talented people to be part of it? It is not particularly funny (except maybe for a scene of dry-humping/careless driving), does not have anything particularly new to say about the shock of cultures between mainland USA and the Caribbean island, and terribly lacks the energy you would rightfully expect.

Worse still, Johnny Depp gives a terrible, two notes performance, alternating between mild boredom and Jack Sparrow's mode with nothing in between. It really is time, after the POTC franchise and the woeful Alice in Wonderland for this fine actor to come up with a good film and fast! Heaven forbid his late career takes a Robert de Niro path and squanders all of our earlier memories. What's next, a Meet the Parents type franchise? Alice in Wonderland 2?

The rest of the cast is given very little to do, except perhaps for Giovanni Ribisi, in an over the top performance that has echoes of Johnny Depp own acting in Fear & Loathing. Poor Amber Heard is little seen and barely heard.

Do yourself a favour and rent Fear & Loathing instead. Or watch The Muppets Orange advert on YouTube. After watching Julia Roberts loose herself in Eat, Pray Love and now Johnny Depp, I have a feeling it might be time to say goodbye to our icons of the 90's, I truly hope this is not the shape of things to come for them.