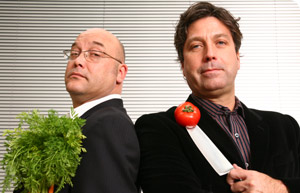 If you are on Twitter, you cannot fail to have noticed a game that consists of creating puns with film titles following a given theme, that journalists, bloggers and bored office workers (aherm) enthusiastically take part to. For example, #catfilms gave us the lovely Divine Secrets of the Meow Meow Sisterhood, #CheapRemakes The Discount Of Monte Christo and Xmen: Second Class etc... And one theme recently, #FoodieFilms got me really inspired not only to find some new puns but to actually imagine what these foodie films might turn out to be, should they ever be made! So I include a few of my own puns and others I have borrowed, and I have been dreaming up storylines... 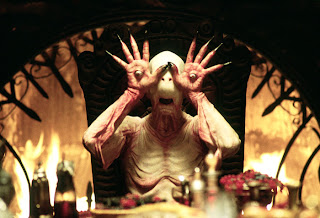 UK Masterchef's judge John Torode is driven to madness after yet another contestant cooks a pan fried scallop, and retires to a cave with his hands permanently shut over his eyes in despair. Rendered pale white after years with no natural light and having had his eyes literally pop out onto his hands for having pushed them too hard in disbelief, he sits, motionless, at the bottom of a cave. The Masterchef producers, worried about falling ratings after their star left the show, offer a new challenge in the finale: contestants must cook a perfect dish using the correct ingredients in that cave, in front of the pale man. Pick the wrong ingredient and he will awaken and chase you... Gregg cameos as the bloated greedy toad from the original film.

Or the secret is in the sauce as the tag line of Fried Green Tomatoes used to say. A Masterchef contestant sees his hope of winning dashed when John and Gregg dismiss his disappointing jus in the final. Driven to madness, spending years rehashing the judges harsh comments, he kidnaps the pair of them, attaches them mouth to anus, creating a single digestive tract out of them, and feeds them that doomed jus from one end of the centipede to the other and back. You will never look at Bistro gravy granules in the same way ever again...

Children of the Quorn

Leafy London neighbourhood Islington, home of New Labour and more twatish British upper middle class families per inch square than anywhere else in the country (I should know, I used to live there) is a haven of tranquility or so it seems. Little do they know what lies ahead... The children, after years of being fed quorn by well meaning, left leaning parents, turns on them and attach them to giant straw scarecrows in the middle of Highbury Fields, before feasting on their flesh, a flesh that had been refused to them for too long.

Tintin is a great success at the European box office, and the curse of the mo-cap seems to have finally been lifted. Except that it makes even less money at the US box office on its delayed Christmas release than Mars Needs Mum. Stuck with what was supposed to be a franchise, and unwilling to spend any more cash on it, the studio sells the rights to Nintendo which promptly turn the Belgian franchise into a Cook With Mamma spin-off videogame, called Tarte TaTinTin. Expect plenty of waffles recipes.

After the departure of Matt Damon, the hopes of a new trilogy are dashed when The Bourne Legacy, featuring Jeremy Renner as, well, not Jason Bourne, flops. The studio is faced with a dilemma. The audience wants Matt Damon/Jason Bourne. Matt Damon is too busy working on the Brothers Grimms sequel that the world has been clamouring for. How to make the film with him, but without the actor? Eureka! A prologue in the new film shows Jason Bourne in the shadow, infecting himself with Treadmill's new experiment, the weaponised alien spray from District 9. Fast forward a few months later, Jason Bourne is under heavy make-up, 50% human, 50% shrimp, 100% badass.
at 22:29