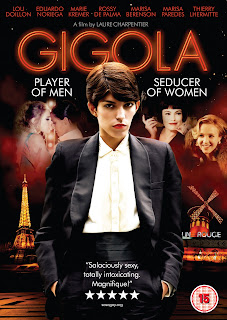 The naughty but nice Gigola is now out on DVD. I caught it at the LLGFF earlier in the year and wrote a review. I am unashamedly republishing that exact same review. I recently compared watching Gigola to finding a bottle of absinthe and some saphic pictures in your French nan's bedside cabinet. This is what I had to say when I first saw it:

Gigola was presented at the London Lesbian & Gay Film Festival today, in the presence of director Laure Charpentier and I was lucky enough to attend. While the bulk of the programme of any lesbian & gay film festival is usually made of the same old and tired coming out stories (I have always believed that the best gay films have been made by straight directors, but this is a debate for another day), and excruciatingly bad films who only made it to the line up because they featured two men kissing, it was refreshing to see a bit of originality.

Based on her novel of the same name, itself based on her life memories of the 60's (90% of what we see in the film really happened according to the director!), the film, low in narrative but high in style, tells the story of Georgie, a young lesbian who shuns her medical studies to embrace the life of the sexy 60's lesbian underworld, and becomes a female gigolo, hence her nickname Gigola. Being a French film, the action takes place almost entirely in bars, cafes, and the cabaret Chez Moune.
There is no real main narrative thread, rather the film's aim is to portray a little known period of recent French sub-culture, and to brush a gallery of eminently likeable characters of cabaret artists, rich and lonely old women, prostitutes and even mobsters that the director encountered in her youth. And she has managed to assemble a fantastic cast. There is a real cinematic pleasure to be had to see Almodovar muses Marisa Paredes (as a sugar mummy) and Rossy de Palma (as a cabaret singer/waitress) back together in the same film, even if in rather small parts. Another arthouse favourite, Marisa Berenson, has a meatier role as Gigola's religious mum, but spends the whole film with a disapproving botoxed stare. Lou Doillon (Charlotte Gainsbourg's half sister), is perfect in the main role, finding the right balance of toughness and vulnerability.
While the film starts off with a rather light tone, light as a bubble of champagne that so freely flows throughout, it does take on some darker undertones later on. The whole story is placed under the dark shadow of the suicide of Gigola's only true love at the start of the film, which goes some way into explaining her coldness and detachment towards the matters of the heart. It does not shy away from the difficulties of living such a free lifestyle, even in the decade of so called free love. There is even a brush up with the local mob that brings a rather unexpected conclusion. 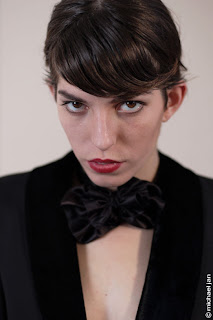 I found the film to be a guilty pleasure, oozing style and naughtiness, like spending an afternoon getting drunk champagne at un upmarket hotel bar in Paris, among older and more moneyed punters. The ever shifting tone jarred a little (never quite knowing whether to be more dramatic or a laugh out loud comedy) but I guess this is the result of the episodic structure of the story. It did make me realise also that, would it not be for cinema, whole parts of sub-culture disappear from general consciousness within decades.
The director was hilarious, full of enthusiasm and wit. She lamented the closure of real life lesbian cabaret Chez Moune, where a lot of the action takes place, and a time of opulence, champagne and diamonds, whereas, according to her, going out the lesbian scene in Paris has all the glamour of a coke with two straws. I wholly recommend this film now that it is out on dvd in the UK.