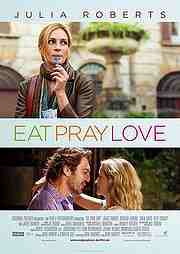 "Plot" (I use the term loosely): A recently divorced American woman travels the world, eats, prays, loves. Audiences shut their eyes, throw up their guts, slash their wrists.

My blog has run the danger lately of only featuring positive reviews. Since I can decide what I write about, it makes sense to only mention the films I feel passionate about. But now and then comes a film whose awfulness is so immense, it has its own gravitational centre. And I feel it is my duty to avoid any more people having their soul sucked into the bottomless pit of this filmic, dimensions bending singularity. I will never be able to unwatch this. But I did it so that you will not have to.


There is nothing wrong with a bit of mindless escapism, or even rom-coms. Hell I actually found He's just not that into you and even Valentine day to be rather enjoyable, in a "films you watch on a plane to pass the time and forget that you are 30,000 feet in the air" kind of way. And the film promised to be an ode to travel, good food, rethinking your priorities, self-discovery, which frankly, can only be a good thing, surely?

So what is so wrong with it. The script, the awful script! It is a catalogue of stereotypes, so heavily filled with it that you feel bludgeonned to death within the few opening scenes. In here American people are so busy, cold and ambitious that they have forgotten to enjoy the simple pleasures in life, take the time to enjoy food, love, spirituality. But do not despair, all you need is those crazy European types who live in an absolute chaos (the collapse of the Euro would have made a great footnote to all those episodes of carelessness), shout at each others, do not care about their waistline, and look like they live in a perpetual pasta advert, nimbed in the sort of gorgeous colours travel adverts never quite have the budget to pull.

But eating pastas and pizzas is not quite enough to justify a journey of self discovery, so what better place to discover spirituality than India! I mean, when I say spirituality, all that the lead character seems to discover in there is that Indian women will all be forced into arranged weddings with boring, weedy IT guys. And that Richard Jenkins should get a 5 years film ban for committing the most annoying character seen on films in ages. Oh she scrubs the floors a little. And sometimes it is worth taking a vow of silence, only to break it immediately.

But time to move on, I take it, logically, after the eat part and the pray part, to the love part? Only once I saw Julia Roberts cycling through the fields in Bali in a deodorant advert kind of way, I was ready to punch myself to a bloody pulp to make the mental pain go away, and I stopped watching.

Javier Bardem is supposed to be in the film, but despite being second billed he had not showed up by this time. Frankly, unless he had turned up as his psycho character from No Country For Old Men and with the same hairdo, I do not think he had anything to bring. Let me guess, does he play a fiery, hot blooded latin type that makes her discover love, making his Vicky, Cristina, Barcelona character looks like a multi-layered model of complexities and subtleties? I will never know. I do not want to know.

I love Julia Roberts, I really do. She is one of my favourites actresses, and I lament the direction her career took after her oscar. Perhaps she felt she had nothing yet to prove, but that is wrong! Why not try to go for riskier choices? Take the path Brad Pitt took, working with interesting directors, beautifully maturing with age? Even her immense talent and even more immense smile are not enough to save this.

Maybe I saw this on a bad day? After all, even somebody like Woody Allen has succumbed to the pitfalls of the American in Europe stereotypes (his aforementionned Spanish escapade). But the film is so devoid of charm and likeability that there is no reason to forgive any of it.

As for Julia, all is not lost, she will soon be seen as the Evil Queen in Tarsem Singh Mirror Mirror (his snow white adaptation). I bet she will do a lot more interesting things than Eat Pray and Love in it.