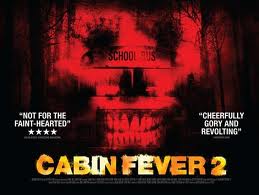 Plot: This sequel to Cabin Fever sees the flesh eating from the first film unleashed on a high school getting ready for prom night, a night the students will never forget...

This sequel to Eli Roth's minor cult classic Cabin Fever (the story of a flesh eating virus unleashed on a bunch of unsuspecting teens) came much unloved. Released straight to dvd, this was disavowed by its promising young director Ti West (who has made a name for himself with the excellent House of the Devil), who left the film unfinished after some heavy interferences from the studio. So is it such a disaster? Far from it. The film is miles away from cheap straight to dvd horror sequels you might expect and it is all to Ti West's credits that you can still clearly see where he was going, with a strong and unique style, an unusual indie soundtrack (with the added bonus of hints of the Angelo Badalamenti score from the first film) and a gallery of oddball characters.


The first film had some delicious touches of dark humour but this one goes completely over the top with it, right from the start which sees the sole survival of the first one (with his face half eaten by the virus) meets a very icky death within minutes, in the timeless horror tradition of killing any survivor from a previous film. There is also the welcome return of the hilarious and very Lynchian Winston, the young officer who "likes to paaaarty" although, sadly, his part, while bigger than in the first film, sort of fizzles out half-way through. 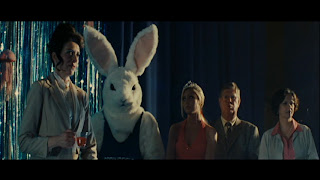 But what really sets this apart is how the director is not afraid of anything, especially bad taste. As tired as we have all been with over a decade of sterile and toothless horrors remakes, the yuck factor here is incredibly high, which several scenes that had me cover my eyes. It is not only extremely gory, but actually pretty disgusting, never so much so that it becomes repulsive though. It's fast, fun and hilarious.

Unlike the first one where the virus took days to manifest itself, here it is only a matters of hours (a fact that is never clearly explained by the way!) before it unleashes its flesh decaying fury in its full gory glory, with a couple of scenes involving that old body horror classic: diseased teeth and nails being pulled out, guaranteed to make you wince. And a scene of oral sex involving some diseased lips and teeth braces has to be seen to be believed! It is a shame this came out on dvd only as this is the sort of film you would need to watch with a packed audience screaming at every gross scene. 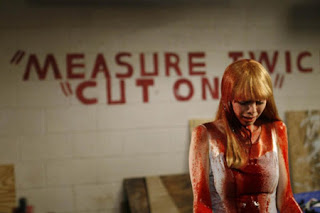 Of course, the film is flawed, and does feel unfinished. A promising character of a particularly demented Biology teacher with hair like the bride of Frankenstein is not given much to do, despite being truly deserving of her own spin off. After all the great build up to the prom, and some increasingly gory scenes as the first victims meet a revolting demise, the promised prom blood bath, with its obvious but fun Carrie references, feels underdeveloped and rushed. And then the story moves on to an odd and short third act taking place in a strip joint, only for a bizarre end credits animated scene to try to fill the plotholes, or possibly opening up to potential sequels (although news were recently announced of two prequels to the fist film being put in production)

This is no horror classic, but a refreshingly gory and fun effort, that shows plenty of evidence of a unique style and some deliciously dark humour. And even a failed effort by Ti West is infinitely more interesting to watch than your run of the mill horror.