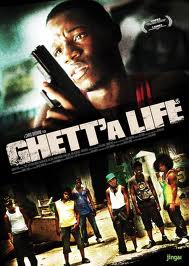 Now this is a what the power of cinema is all about. You walk into to a dark room,take a seat and settle down for a film, and instantly you are transported to world that you can almost smell and taste. This place is Kingston, Jamaica. And not the Jamaica of holiday brochures and reggae music videos – this is raw inner city Kingston – a place divided into 'Garrison' community's and so violent and brutal that army tanks patrol the streets. I love it when a film comes along and has you gripped from start to finish, and I must admit it didn't sound like my cup of tea, so an even better surprise.
This is the story of Derrick Thompson, (Kevoy Burton in his first feature film) and his desire to follow his dream of becoming a boxer, just like his idol, Lennox Lewis (who by the way is the executive producer). Derrick's dreams are hampered by the political war that is dividing the garrison community where he lives in central Kingston. There are is only one gym in town and its on the other side of  a wall, that he has been warned to never cross. Such is the territorial war, the two sides keep to their own turf.
With nothing to lose, Derrick makes the decision to join up and start training at the 'Bruising Boxing Gym'. The fact that his enemy's from street fights are all members, makes for a tough start, but tensions fade as it becomes clear he is there purely for the sport. The training has to be done behind his parents back though, as his father Lenford (Carl Davis), is an important leader in the community, dedicated to winning the garrison war in the upcoming vote, and his son can't be seen to be spending time with the other side. Derrick's mother, Dawn (the wonderful Karen Robinson), is more sympathetic to her son's dream. 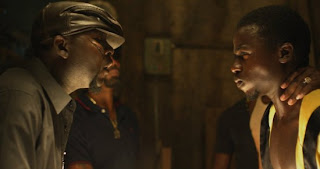 Ghett' a Life manages to blend boxing, the political war, grief, fear and new love all together, into one fast paced colourful action film. It's not just a boxing film, and not just about gangster's, and this blend makes it all the more engaging. There is also the element that feels like your are watching a documentary about inner city life in Kingston, which is thoroughly fascinating. The main story though is that of hope in the face of despair, and of the power of unity.
With characters like Gully Rat, Big Toe and Sin, to name a few you will be immersed into the world of Jamaica. The film is subtitled throughout, and this is essential as most of the characters speak Jamaican Patois, which I absolutely loved. There is a rich texture to the dialogue, which even after many years in South London, I have only glimpsed on the surface. There is a brightness in the colours used, that contrasts against the darkness of the criminal world.
Written and directed by Chris Browne, 'Ghett'a Life', has been 10 years in the making, as funding was hard to come by, despite the fact that he won Grand Prize for best script at the Hartley-Merrill International Screen writing competition. This is his second film, and a follow up to 'Third World Cop', for which he used many of the same cast and crew. Winston 'Bello' Bell, is excellent in the role of Manuel, the boxing coach. In the role of the 'Don' Sin, we have the well cast Chris McFarlane. His performance as the murderous 'Sin' is authentically evil. In the role of Derrick's love interest  and Manuel's granddaughter we have Lisa Williams, as Camella.
'Ghett'a Life' which premiered at the Toronto Film Festival in September this year,  has now beaten 'Third World Cop', as the highest grossing film in the Caribbean, which  means the next Chris Browne project should have no problems with funding. The UK release date is December 2nd, and what better way to escape those cold dark nights than by escaping to Jamaica for while.