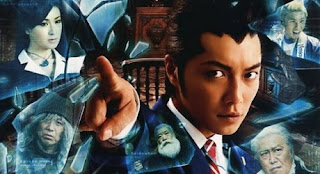 Maverick Japanese director Takashi Miike is having the most versatile and prolific career. Having clocked up an average of three films per year since the start of his career in the early 90's, in a variety of genres, he came into prominence in the West with a serie of infamously gruesome films, Ichi The Killer and especially Audition, as well as the impossible to describe, disco zombie/evil dead/sound of music mash-up, The Happiness of the Katakuris. And he continued to surprise everybody with the absolutely brilliant period samurai action film 13 Assassins last year, followed by his less well received, other period samurai drama, Hara-Kiri: Death of a Samurai, which was in Cannes this year.


And if anybody thought that he was about to become the James Ivory of samurai/Japanese period films, you can breath a sigh of relief thanks to his new project, which sees him go into yet another completely different direction. His new film, Phoenix Wright: Ace Attorney, is the adaptation of a very popular Capcom videogame, that sees the player takes on the role of  young defence attorney, alternating between detective scenes and the actual trials. Sounds boring? Then imagine the whole thing as an over the top manga, which has the player shout through a microphone while its avatar does the manga stereotype of the slo-mo rising in the air with its mouth wide open behind a pulsating, intensely coloured background, which makes it a joy to play on the public transports.

You might wonder what approach would work best to adapt this to the big screen? Surely we do not need yet another boring courtroom drama? Instead, on the back of the two teasers which has just been released, it seems that Takashi Miike has gone for a very faithful approach, that perfectly recreates all the graphic excesses of the game through some amusing CGI effects. There are lots of shouting and angry finger pointing, digital evidence being thrown through the air, and the OTT art direction (especially the crazy manga hairdos) is a perfect match for the game. 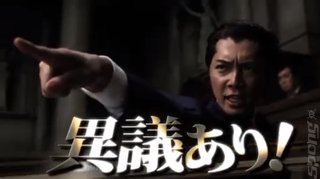 Since these trailers were released yesterday, some have accused the Japanese director of copying the style of the equally larger than life and colourful Scott Pilgrim, which is as daft and unfair as you can get, considering how much Edgar Wright cult classic owes to mangas and their esthetics in the first place. I have a profund dislike for your usual, stereotypes courtroom scenes in American films so I can only imagine how a few of them could have benefited from the Ace Attorney/Miike treatment. Glenn Close in Jagged Edge, slapped up with the Cruella De Vil's hairdo, jumping out in the air shouting out evidence in slo-mo? Tom Cruise in A Few Good Men with a crazy, spiky hairdo and his sidekick Pikachu?

Phoenix Wright: Ace Attorney is out in February 2012 in Japan. Given the popularity of the games, we can only hope that it will make it to the West at some stage, although we should not hold our breath. For every Miike film that makes it to our shore, there are three that are never seen. He recently made one called Zebraman 2, about a, well, zebraman superhero that has yet to trouble our multiplexes sadly. One teaser and a longer trailer have been released at the same time.