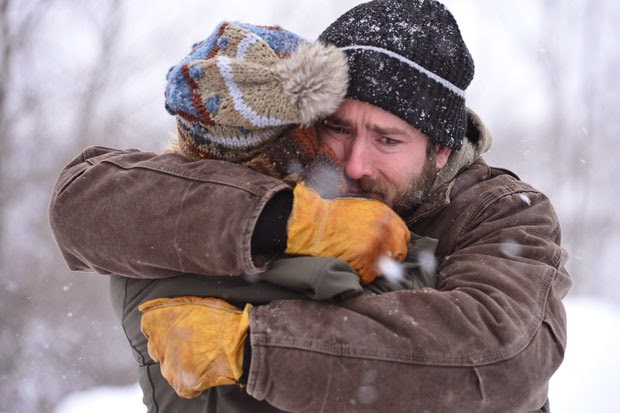 After the amuse-bouche of yesterday came my first full day in Cannes. I must say, with the glorious weather, the seemingly smaller queues for screenings combined with the ease of access my press pass is giving me, the festival is proving to be a completely stress-free experience so far! So on this day, expectations were high. A new film by Atom Egoyan, a Simenon adaptation and a late introduction for me to a director I have been keen to discover, Nuri Bilge Ceylan.

Canadian director Atom Egoyan is in my top 10 of favourite directors, despite a wildly uneven career. But when he shines, he goes supernova, with two of his films (Exotica and The Adjuster) among my favourite of all times.

In The Captive, a young couple (Ryan Reynolds and Mireille Eno) is torn apart when their young daughter is snatched while under the watch of her father. Fast forward a few years later and we find the victim, now a teenager, living in the basement of her abductor (creepy Nicolas Cage dopplegänger Kevin Durand), who has some more nefarious plans in store for her, and the inspector originally assigned to the case (Rosario Dawson) herself kidnapped (this is no spoiler, you find this out within the opening scenes). But the father has never lost hope in finding his daughter again.

The film starts off promisingly, being suitably atmospheric thanks to the harsh wintry landscapes that the Canadian director always films so well, and with an intriguingly fracture narrative that goes back and forth in time, often forcing you to figure out the time frame what you are seeing is actually taking place in. With his usual theme of voyeurism present here, this feels like a throwback to some of his best work, within the frame of a more mainstream cinema. 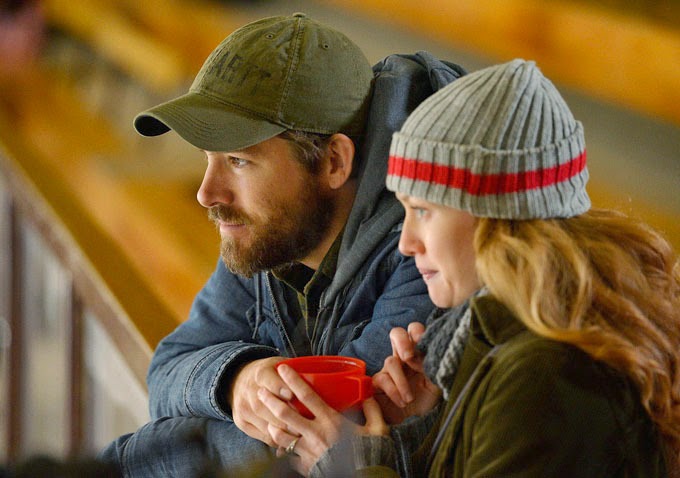 Sadly, none of it pays off, and the film collapses spectacularly early on, veering between the contrived, the uninspired and the almost laughable in places, all while being riddled with the stereotypes of the kidnapping thriller sub-genre (recently Prisoners had a far more interesting take on it). And while Atom Egoyan throws some hints of a more disturbing and complex film that could have been, these prove to be red herrings, with a particularly flat ending. Plus the film tackles an unpleasant subject but seems to have very little to say about it, apart perhaps that the internet is bad and is helping monsters to assemble. Ground breaking.

The cast at least shines, with Ryan Reynolds proving shortly after The Voices, that indie cinema might be the way forward to flex his obvious acting muscles. And Rosario Dawson brings in her undeniable screen presence to a part that does not amount to a great deal after all. They both deserve a better film. 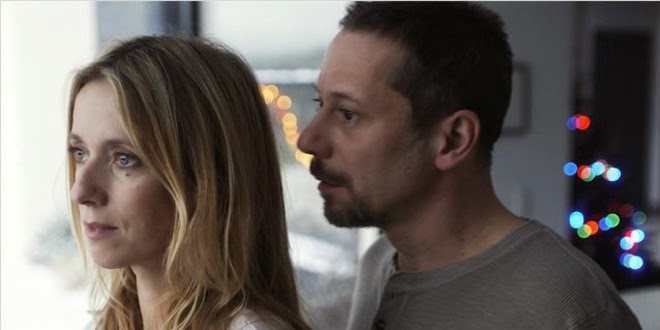 I then went into the second screening of the day almost by accident as I was walking past the Debussy theatre where Un Certain Regard screenings take place and, seeing the press queue empty, I walked in within five minutes of the film starting. This was La Chambre Bleue by Mathieu Amalric, who won best director for On Tour here a few years ago and was relegated to the second division of the Official Selection with his latest. The film is an adaptation of Simenon, who is best known for writing the Maigret books, and whose work is a staple of French Sunday evening TV dramas in the same way as Agatha Christie in France.

Going through flashbacks as a man (played by Mathieu Amalric himself) is interrogated by the police about a murder (although we are not told who the victim actually is right until the third act), while being questioned about his affair with childhood crush, now a married woman he met by chance again.

This was rumoured to be in the main competition and I can see why this was held back, as this is a smaller film more suited to a sidebar, due to its smaller scope. But it never feels stagey despite the few settings, or like the TV drama some have called it out to be (and not just because full frontal nudity wouldn't be allowed!). The director has an elegant and understated direction, with an abundance of close-ups conveying the feeling of entrapment felt by the main characters: trapped in a loveless marriage, trapped in a small bourgeois town… with some fleeting but frank scenes showing a newly found intimacy as the only escape.  Speaking of bourgeois, the film evokes the spirit of Chabrol but without the usual complexity and twists of the Nouvelle Vague master. If anything, the biggest twist is perhaps that there is not really much of it, rather the story unfolds with a sense of inexorability. This is a more Gallic centric that might not find much favour outside France (where it is already out in cinemas) despite the world fame of its director/lead. 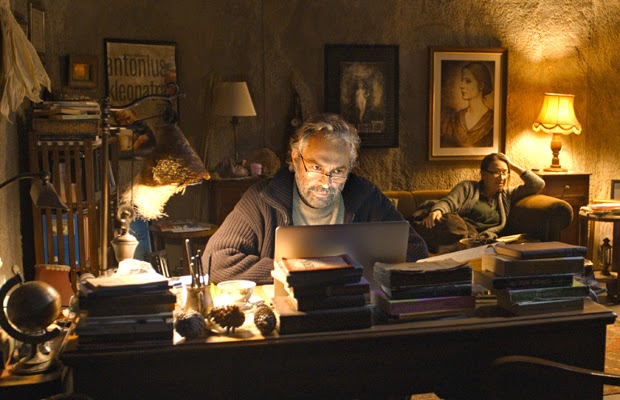 And it was time for the third film of the day. The film had a single red carpet screening in the afternoon, a slot usually reserved for the smaller films of the competition, although I suspect its length had more to do with it (a cool 3h15) as it might had sent festival-goers to sleep had it shown in an evening slot! It was a tense time as this was the only chance to see this, with press being allowed too. Tension was running high since there was so sight of the press queue signs an hour before the start, and after an impromptu encounter with a lovely Israeli journalist, himself also looking for a way in, we found ourselves at the front of the queue when it was finally established (the various entrance to each queues keep changing between screenings).

And tensions was running even higher when the barriers opened with a mighty scuffle taking place, which lead the security staff telling everybody to calm down! This is why I love Cannes so much. Where else in the world could a whole crowd fight to get into an arthouse, 3h15 film long like this! Even in a city like London, the film might find a slot at the London Film Festival and a few screenings at the Institute Contemporay of Arts. Here we were lucky to see it in one of the biggest screens in the world in optimum conditions with a (mostly) attentive audience.

With the title and the director's reputation, I was expecting long, lingering and silent scenes which speak volumes. Instead, I got the exact opposite, an incredibly talkative film which seldom ventures outside (but when it does, it is sublime, with the promised gorgeous shots being delivered!). And it proved to be one of the highlights and most thought provoking films I have seen in a while.

In Winter Sleep, Aydin (the brilliant Haluk Bilginer, on a way to an acting award comes next week?), a retired actor/intellectual and owner of a hotel and several houses nearby, leads a seemingly content life with his young wife Nihal (the equally impressive Melissa Sözen). Yet cracks in his life soon become apparent. He has not written a word on a book about Turkish theatre he has been plotting in a while, the hotel has few customers, and he is struggling with his moral compass when having to handle his tenants struggling with their rent. His bored wife is throwing herself in some vague charity projects to pass the time, and his nagging sister has returned, bitter after her divorce. 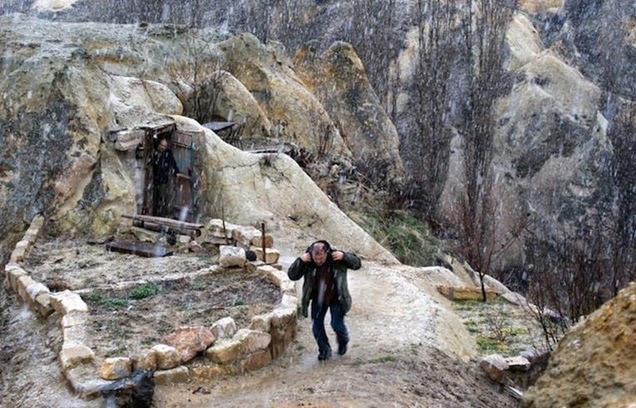 In many ways Winter Sleep is reminiscent of a certain kind of arid arthouse cinema that was so prevalent in the 70's/early 80's, with his heavy going themes of morals, Evil, guilt, religion, and a similarly old school way of unleashing some particularly long (but never boring!) scenes of dialogues and debating between the characters which may test the patience of some. But it braces some powerful and timeless issues with the theme of class war simmering, leading to an incredibly powerful scene involving and Nihal, and Aydin's tenant. The Winter Sleep of the title seems to refer to growing old and realising that little you have done has amounted to much, that you have lost your inspiration and appetite for life, that even your loved ones are getting away from you.

It is almost a shame that this kind of intellectual cinema is no longer in fashion, submerged as we are by a wave of irony and popular culture, where nothing can be taken seriously but this is a breathe of fresh air by contrast. And I must mention the beauty of it once more, with a ravishing cinematography.

To end the day on a high note, in one of those so precious and unique Cannes moments, as I was making my way outside the Palais, I noticed Winter Sleep's director Nuri Bilge Ceylan who, while waiting to be whisked away in an official car, was happily chatting with fans and pausing for pictures. I got close enough but my dream selfie with Nuri Bilge Ceylan was not to be.