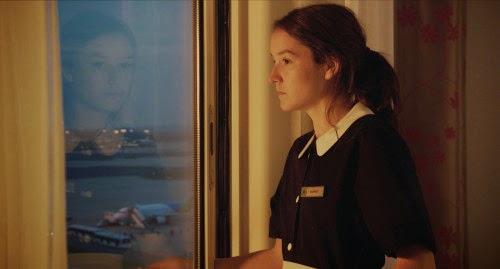 We were expecting Bird People to be in the main selection this year, only to find it relegated to sidebar selection Un Certain Regard. This is not necessarily a bad sign, as the latter is reserved for more fragile films which might suffer from the cutthroat world and intense scrutiny of the former, and in fact the same thing happened with Sofia Coppola's The Bling Ring and Claire Denis' Les Salauds last year.

Pascale Ferran is little known outside France, yet she made a big impact twenty years ago as part of a new generation of French directors, which included Arnaud Desplechin. Yet after directing two films back to back (Petits Arrangements Entre Les Morts & L'âge Des Possibles) in the mid 90's, we had to wait another ten years to see her direct again, with her acclaimed adaptation of Lady Chatterley in 2007, and another seven years to see her behind the camera, with the intriguingly titled Bird People.


Bird People follows two very different characters as their destiny collide in an airport hotel outside Paris, each of their storylines taking up one half of the film. The first one has American engineer Gary (Josh Charles) suffering a spectacular midlife crisis: on his way to the Middle East for business, he drops his assignment and resigns on the spot, then break up with his wife by Skype. The second half follows failing university student/part-time hotel maid Audrey (Anaïs Demoustier) as her life changes in the most unexpected fashion, in a surreal twist which I'm sure will be spoiled but that I won't reveal!

Bird People is a film of transit, of transformation. Its setting was of course not randomly chosen, as an airport hotel is a transient place in which you would find yourself by need more than by choice, on your way to somewhere else, the perfect place for both characters to take the time to evaluate and questions their life choices so far, and plan their new departure out of so many options.

The idea at its core is laudable and the film very unusual, so I want to applause the audacity of the director with her bold proposition, especially considering how French cinema lacks of the fantasy and even surrealism it used to be fond of, with the curse of "La Femis" (the illustrious cinema school which produced too many identikits directors and their obsession with naturalism) still very much in evidence. But sadly it does not quite work. Bird People is rather obvious and heavy-handed, and it feels more like a great idea for a short stretched to a two hours film.

I have no problem with slow, contemplative films as long as they have some weight and ideas but past the rather original premise, the director does not seem to have much to say and she spreads it too thinly, over its absurdly long running time that clocks in just over two hours. Yes modern life and its pressure puts a heavy weight on our lives, our aspirations... and we would all dream of being freed from its shackles, from a dead end and/or too demanding job, from a relationship that is going nowhere... But is that it?

There are two scenes that stand out however. The first one is the uninterrupted, ten minutes long break up scene by Skype which, without being too dramatic and over the top, feels terribly real and painful, as all the years of disappointment and growing apart are crudely exposed. The second one is the aforementioned "surreal" scene which drew some gasps from the audience, but then again past the first few minutes of surprise, yet again it feels as if Pascale Ferran does not quite know what to do with it and certainly does not make the most of it.

Truly original films are rare enough that I would almost recommend Bird People, since at least it tries something different. But it still remains a bit of a misfire for all of its ambitions.