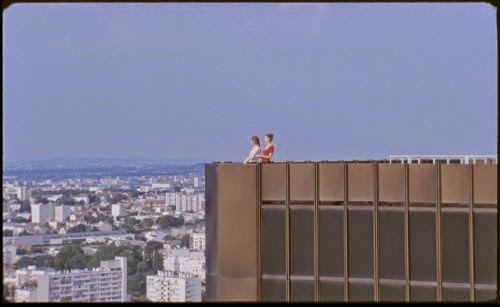 There are some who lament the lack of fresh new talent in the official selection at the Cannes Film Festival, which is both unfair and untrue, as the presence of Wild Tales and The Wonder proves this year. Besides, as interesting as there are, some films are just too fragile to be competing against some masters of cinema and would be destroyed in the process. And this is where sidebar selections come in, especially the smallest and newest one: ACID, so new in fact that many attendees are not even aware of it even though it is actually 21 years old. And it has discovered its fair share of talents: Lucas Belvaux, Ursula Meier, Yolande Moreau... It is in this selection that was presented Mercuriales this year.


Mercuriales has an intriguing and unusual location. Mainly set in twin towers called Les Mercuriales in the outskirts of Paris, it follows (and in some cases abandons rather quickly, like a security guard seen in the opening scene) an ensemble of characters who gravitate in and around it. Not overtly concerned with a structured and easy to follow narrative, the director puts side by side some ultra realistic scenes against some more experimental ones featuring a mix of fantasy, surrealism and science-fiction.

The former are the least successful, coming across as stereotypical of a certain kind of cinema verité which is much favoured by fresh graduates of la Femis (the grande dame of cinema schools in France), complete with fractured and seemingly improvised dialogues (to make it feel real!) and a hint of evocative social commentary.

The latter work better, and make you wonder if the director should have gone on an even more experimental path and solely concentrate on those. The free flowing process of Vernier's cinema suits them, and he shows a promising formal invention, making the most of its location that comes across like the future as seen in a 70's sci-fi film (at first I thought we were about to watch a French mumblecore take on Cronenberg's Shivers). And the soundtrack is resolutely 80's John Carpenter. Mythology is evoked as well as fairy tales, with the impromptu appearance of an owl, addressed to as if he were a prince by one of the female leads. And there are echoes of Jacques Rivette's Pont Du Nord, with it recurring theme of Paris as a playground transposed to its suburbs, and especially the apparition of some monsters-like and seemingly apocalyptic cranes.

While I don't think the director necessarily wants us to over-analyse his film. I could argue that he is depicting a view of the current conflict between old and new in France, a country which more than his neighbours struggles to let go of its glorious past to embrace the modern world. I suspect Virgil Vernier is quite happy for the audience to be carried by the flow of his experimental ideas. His film shows some promises but he stretches it too thinly, and would benefit from a tightening his script and, without renouncing to his surreal flourishes, from a better structure.