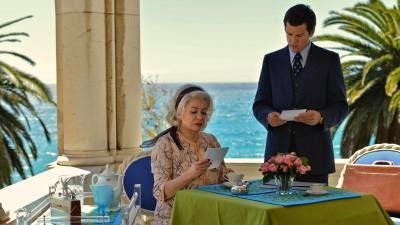 L'homme Qu'on Aimait Trop was a late addition to the official selection, and is presented out of competition, as if the festival was trying to find a diplomatic way of including it, given its starry cast and prestigious director, without exposing it to the ruthlessness of the competition. And indeed it seems as if André Téchiné has somehow gone out of fashion in the world cinema circuit.

Faced with the comeback of a certain kind of heavy and intellectual cinema (such as Winter Sleep and Leviathan, both in competition this year) that used to be so popular in the 70's and 80's, his films might lack a certain oomph and arthouse street cred while not offering the whimsical experience of a more wide reaching and retro French cinema, meaning there is little room for them outside France, where he continues to be popular. Which is a shame as while his directorial input of late has not quite matched the highlights of his career, it remains consistently rewarding.


L'Homme Qu'on Aimait Trop is based on the true story of the mysterious disappearance and likely murder of casino heiress Agnès Le Roux in the 70's in Nice. Her body was never found, and the likely culprit Maurice Agnelet continues to be dragged in court to this day by Agnès' mother. This is a story which has a certain echo for me who grew up in the French riviera of this era, as I still remember my family talking about it, and it marked the end of a certain era of glamour in the French riviera.

When the film opens, Agnès has just returned to Nice from Africa after a failed marriage, and finds herself under the protective wing and watchful eye of her mother Renée (Catherine Deneuve), who runs a casino. Directionless and frankly lost, it is not long before she falls under the spell of her mum's confident and lawyer, Maurice Agnelet (Guillaume Canet). As the local mafia has its eye on the family business, Maurice's scheming and the influence he holds over Agnès puts it all at risk.

The matters of the heart and the torments of passion are what motivates André Téchiné and what he does best, and this is no exception. This tale of an unrequited passion has echoes of Adèle H. His precise and unshowy direction serves the wonderful cast and they make the most of it. Catherine Deneuve hasn't been that moving in a long time, in a part which finally requires her to flex her acting muscles as opposed to just being used for what her public persona represents. A strong woman in a time where it was still difficult to get ahead and earn respect for her gender, we see her go through a devastating downfall as she loses everything and everybody around her, until her sole life goal becomes to find justice for her daughter.

Guillaume Canet thankfully doesn't go down the suave and enigmatic route which would have jarred with the tone of the film, but still manages to be mysterious in a more subtle way, and the film does not give any answers or even any clue as to whether he was guilty. As a small time lawyer whose talents does not quite match his ambition, the director never tries to represent him as a monster, because life is more complicated than that, just a heartless opportunist who took advantage of his charisma.

But the true star of the film is Adèle Haenel, fresh off her Best Newcomer César. It was an inspired idea to cast her in that part of what is essentially a victim, as her appearance and acting is miles away from the usual young French actress stereotype.  And her mixture of determination and emotional frailty are perfectly conveyed by the rising star of French cinema. While not chasing sympathy, it is the strength of the script that she does not appear as one note and spoiled. The heart has its reason that reason ignores as the say in France, and this is yet another tragic and painful representation.