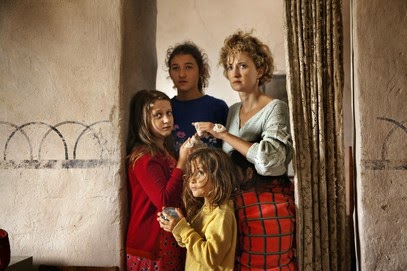 The last day in Cannes is spent literally catching up on as many films as possible, with all the ones in competition as well as those from Un Certain Regard being showed back to back in all the screens of the Palais. This was stretched to two days this year, with the competition having been shortened by a day and the awards given yesterday. So I had one last chance to catch a final film early in the morning, and I picked Le Meraviglie by Alice Rohrwacher, which won the runner up prize last night, an award which surprised many.

Le Meraviglie is set in the 70's and follows an Italian family of beekeepers in the countryside, with all members, no matter how young, are made to help in the rather painful process of producing honey. The strict father is unwilling to embrace the modern world in the way that his daughters might, a modernity which they are unwittingly exposed to when a TV channel sends out a team nearby to make a tacky game show featuring local producers. At the same time, the family has to contend with an adopted boy with behavioural issues handed over to them by social services in exchange for a handsome financial reward.

Le Meraviglie is a gentle yet unsentimental film, that does not rely on an overly melodramatic script and emotional outbursts. It patiently and painstakingly depicts the daily life of its subjects, with the eldest daughter Gelsomina (Maria Alexandra Lungu), being the emotional core of the story, and the only one who seems to realise the changing nature of the world around them, while herself feeling the change that comes with teenage years. The father, Wolfgang (Sam Louwyck) is presented as a figure to be feared and admired in equal measures, even though cracks in his elder daughter's respect are beginning to appear, and she opens up and wise up to a world that eludes him.

The greatest strength of Le Meraviglie is to depict social realism without feeling forced, a flaw which I have witnessed in many French directors in particular (see my review of Les Mercuriales, shown in Cannes). Not only the director does not try too hard to give her film a gritty look, there are actually hints of magic realism as well, with a few scenes that feel more dream-like: Gelsomina's trick of releasing bees from her mouth, and the impromptu apparition of goddess/TV host Milly (Monica Belluci in an amusing cameo), who would not be out of place in a Fellini film with her extravagant outfit.

This is a women's film and the female cast is uniformely brilliant. But Sam Louwyck as the father is particularly impressive too, with his mixture of strength as the head of family trying to pass on his traditions, and shyness (witness his less than successful participation at the TV show) and even powerlessness facing a changing world.


While unfortunately it is difficult not to judge the film without wondering how it managed to push past hot favourite Mommy to the runner-up prize, Le Meraviglie remains a beautifully observed and quietly affecting coming of age film.
at 21:47