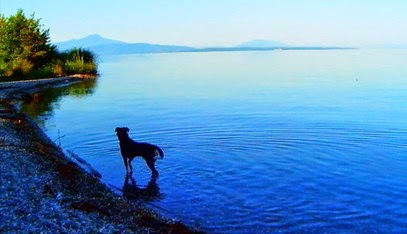 Is it even possible to objectively review a film by Jean-Luc Godard? It seems as if you can only belong to two camps: those who see it as an impostor and have long given up on even trying, and those full of hyperboles at the ready for any of his new offering. Yes his work over the last two decades have proven challenging to say the least, but there is a certain freedom and sense of experimentation to it which I can only admire even if I am not completely on board with it. And detractors and fans alike were intrigued when it was announced that he was to make a full feature in 3D (after his segment in 3X3D). So it is with an open mind that I attended the sole screening of his film at the festival, among a buzzing atmosphere, but with the master sadly absent, in fact the only director allowed not to attend the screening of his own film by the festival (it is a condition of participation for anybody else).


As you might expect, Adieu Au Langage 3D does not have the most traditional narrative, and follows the same format as his recent films, a notebook/collage of conceptual ideas and digital experimentations. This is a director completely free of any creative shackles (for the better or worse), with an apparent disregard for mainstream audience: his jarring sound effects for example, with a particularly piercing seagull scream reminiscent of his very lose King Lear adaptation which was filled with them, and his abrasive visual flourishes.

Above all though, for those willing to follow him, there is a thirst for knowledge on display, and an endless questioning of our civilisation past and present, with a willingness to share them even if just with some happy few deemed worthy enough. I have this image of Godard as a grumpy but erudite man, and with his digital brush, he comes up with some thoughtful and challenging questioning, with a rich material that will require further viewing to fully explore, with the nature of man against animals, and within this the brutality of an alleged civilised humanity being an emerging theme.

Having said that, there is actually a story at its core even if slight, with the presence of a couple who seems to be struggling to communicate, for all of their perceived closeness (we see them comfortable in some very intimate situations and mostly naked), a reference to the film's title. And following on this, some historical recreations featuring Percy and Mary Shelley perhaps evoke a time in which communication was both easier and richer, for all our new technology.

But what about the 3D? His use is as playful as you might expect, and this is what I admire with Jean-Luc Godard. Far from being stuck in an ivory tower, he is open to the world of cinema and new techniques, and the 3D in this is often humorous, sometimes willingly nausea-inducing, and at times breathtaking. There is an effect in particular used in a couple of scenes in which the image splits into two independent yet parallel streams before getting back into focus as one that prompted a spontaneous applause from the audience.

Madening, infuriating yet more engaging than anticipated, Adieu Au Langage 3D is a film to be enjoyed/endured in equal measures by a man who, despite being in his 80's, is willing to push the boundaries of cinema in a way that few younger directors are.