Cannes 2014: Two Days, One Night by Jean-Pierre and Luc Dardenne 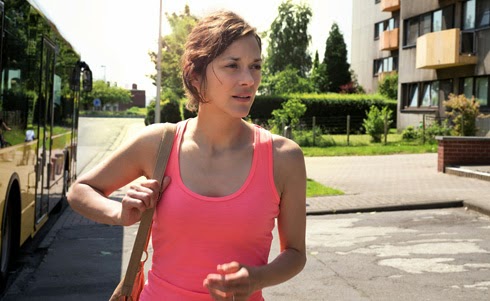 Two Days, One Night is Marion Cotillard's third attempt in a row to win the best actress prize, after Rust & Bone and The Immigrant (the latter a woefully underrated film for which she would have been a far more worthy recipient than Bérénice Bejo). Eyebrows were raised when this project was first announced, as this was to be the first time two times Palme d'Or winners Jean-Pierre and Luc Dardenne were going to work with a megastar of this caliber. So as we all gathered for the morning press screening in the Palais, we were wondering whether they were about to make history by winning a third Palme, and whether Marion Cotillard would finally be rewarded. And judging by the result, the former is exceedingly unlikely, the latter would be nice even if unwarranted.


Two Days, One Night is based on the true story of a female employee in a struggling small business in Belgium, whose boss gave her colleagues an ultimatum: being the last one to be employed, they had to choose between keeping their bonuses and letting her go, or saving her job, a Sophie's Choice for our recession times. And the film follows her as, over the course of a week-end, she has to swallow her pride and visit all of her colleagues to persuade them to keep her.

They say life is stranger than fiction. Indeed, were the film not based on a real life story, it would have been difficult to accept the premise as being realistic. And yet as proven here, just because a film is based on an existing situation does not make it plausible, and this is the first weakness of Two Days, One Night, a surprising drop of form by all the conquering Belgian directors.

The fault lies mainly on an utterly formulaic and predictable script. As Sandra goes on her quest to save her job, it becomes too easy to guess which colleagues will accept or not, going from a "yes" to a "no" to a "maybe" to a "no but actually yes" from scene to scene, and none of them feel like real characters, more like plot devices. And often the dialogues does not ring true at all, in fact, (and it might have been due to mid-festival fatigue and the early hours), a rather dramatic development and line of dialogue by Marion Cotillard prompted some uncharitable but rather justified laughters in the audience.

I do not know how close to the facts the film is, but at least not all is black and white with the situation, as we find out about Sandra's past problems in the office, and the director chose to portray a demographic that is seldom seen on screen, suburban lower middle class, rather than falling into the trap of miserabilism. All of them could well manage without that extra money, but would they give up on various projects and material goods for somebody that some hardly know? We are left wondering how we would have reacted in such a position.

But this is not enough to save the film, which could have been a subtle evocation of the harsh competitiveness of life at work nowadays as everybody is struggling, not just at the top of the ladder but lower down. And it does feel as if the Dardenne brother's usual lightness of touch and subtlety has deserted them on this occasion. As for Marion Cotillard, while her great talent just about make her performance work in many scenes, she is too often encumbered by clunky dialogues. And I would be very surprised if the film won any prizes this week-end.