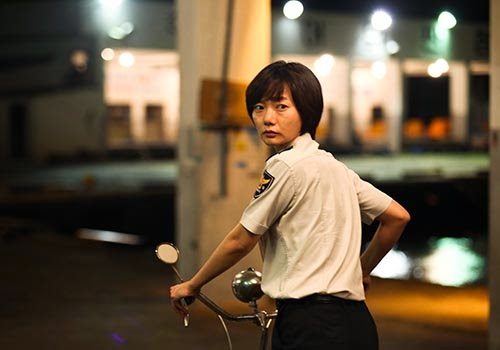 Before the review itself, I just wanted to point out how the magic and glamour of Cannes are to be found at any hour of the day. A Girl At My Door, presented in the Un Certain Regard sidebar selection in a single morning screening, saw its star Bae Doona casually turn up in a limo as we were all waiting to go in, shining all the megawatts of a movie star despite the grey weather, and I can vouch that she looks just as effortlessly stunning in person as she does on screen.

A Girl At My Door is the first film of July Jung, and follows police officer Lee Young-nam (Bae Doona) as she relocates to a small city for reasons at first unknown to the audience, a new environment she struggles to fit in with, having to put up with misogyny and unfriendly locals. She soon becomes close to a young girl who is the subject of family abuse, and takes her under her protective wing. But skeletons from her own past are threatening to emerge...


While Bae Doona has achieved stardom in and outside of South Korea, thanks to films such as The Host, Air Doll, and having seemingly become the Wachowsky's new muse, it could be argued that we had so far seen her play mainly the same part, with a collection of fragile and vulnerable characters bruised by the real world. No such thing in A Girl At My Door, which marks a real departure from this. Melancholic, world-weary, hitting the bottle as the going gets tough, this is a new and welcome facet of her talent we see here, in a difficult role in which she refuses to chase sympathy.

The script is mostly competent, as without playing with cheap twists, it still hits the audience with a couple of surprises, and patiently build up its dramatic momentum. A little too patiently however, as you could perhaps have easily chopped a good 15 minutes, and a subplot involving some illegal immigrants does not yield any great pay off. It feels as if first time director July Jung wanted to embrace too many themes in her underlying portrayal of South Korea, but she would be better off focusing a little more in her next feature.

I only realised that as I saw the end credits, but the film is produced by Lee Chang-dong, the director of Poetry, which did not come as a surprise. Both directors share a similar style of realism, taking their time to set up their stories and characters, and a way of confronting the audience with some very uncomfortable moral dilemmas and the complexities of life under a seemingly normal facade. Although it has to be said July Jung is perhaps a little less melodramatic than her distinguished producer and mentor and than many of her counterparts, as South Korean cinema is renowned for its outré and over the top dramatic flourishes. I must admit however, even I gasped at some of the later plot developments, and the ending is slightly problematic and a bit of a minefield that July Jung does not quite pull off.

A Girl At My Door. South Korea. Un Certain Regard