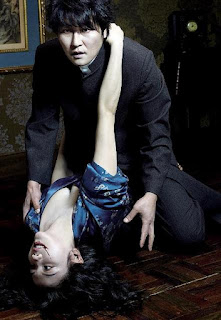 Finally an Asian title in my list. I do lament its lack of variety somehow but I wanted to be honest and put my favourite 20 films, not a list carefully designed to show off a vast filmic knowledge.

In Thirst, a failed scientific experiment to find the cure for a virus goes terribly wrong and sees the only surviving guinea pig, an idealist priest, afflicted with a terrible thirst for human blood. And it all goes from bad to worst when he embarks on a murderous affair with the bored wife of an old friend.


As much as I lament the lack of Asian titles in my top 20, you have to give it to South Korean cinema for having been consistently brilliant over the last decade, and indeed, several titles found themselves just below my top 20. I remember a Q&A with a young filmmaker at the ICA for the London Film Festival 2 years ago, where he explained that the South Korean government had launched an aggressive policy to develop their cinema and nurture its young talents through films schools, and it shows. 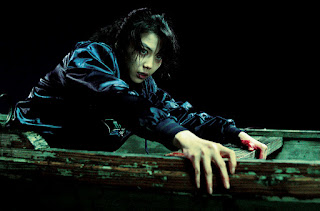 Among so many of their talents over there, Park Chan-Wook is by far my favourite. With several films behind him already, including Sympathy For Mr Vengance, he exploded on the international scene back in 2004 with the wonderful Oldboy, which was unleashed to the wide world at the Cannes Film Festival, and where it came second behind Bowling For Columbine who won the Palme d'Or. The latter had 5 votes, the former only 4. Five members of the jury will have to live the rest of their lives knowing that they made the wrong decision.

Interestingly, as much as I admire Oldboy, and would probably concede that it is a better film, it is Thirst that has resonated with me and left more of an impact ever since I saw it. And despite being slightly flawed, it was such a shock that it has confidently taken its place in the top 10 of my favourite films.

While I have been to its close neighbour Japan several times, I have never visited South Korea, and I had the misguided preconception that their cultures were similar. But solely basing myself on their cinema, I can now see they could not be any more different, and in fact, if there is a country that seems much closer to it, it is Italy. Both seems fertile ground for over the top drama, passion, family intrigues and bloody revenge! 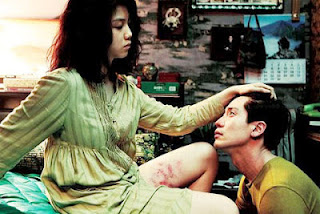 And all the things I love about South Korean cinema are present in Thirst and in abundance: the passion, the fury, the extremely well written script, the visual prowess and inventiveness... (and the bloody revenge.)

I remember being very intrigued when I first heard of this, as it was described as an adaptation of French litterature classic Thérèse Raquin with added vampirism. While it is not a strictly faithful adaptation, it does borrow several plot elements, as well as its underlying themes.

And while I did find the first half to be dragging a little, putting all the plot elements into place, the second hour is among the most impressive I have ever seen in film. Make no mistakes, it is a horror film, with several very violent and almost unpleasant scenes that are certainly not played for laughs. But it is also a film with much philosophical undertones, and once the story gets going, a compelling and demented romance that grips you and constantly dazzles with its unexpected turns. Park Chan Wook is not so much interested in reinventing the vampire mythology, rather, he uses its narrative conventions to brace such themes as morals, depravity, conscience, and he does it with his unique visual flair.

Most impressive is the acting by the two leads, Kang-Ho Song as the priest torn between his morals and the appeal of lust and blood, and especially Ok-Bin Kim as his temptress lover, with them two making one of the best pair of doomed lovers in cinema. Finally, the ending has got to be one of the most affecting I have seen recently, a cruel and fitting conclusion to what has preceded. It is an exciting, tensed, compelling, and always surprising film that feels like a punch in the guts, I could not recommend it enough.

In on joint interblogs films challenge, Martyn Conterio picked I Was A Male War Bride as his number 10, you can ready his post here.

Tomorrow, get ready for some cold paranoia.