I first saw Cruising at 17, attracted by the cheap thrills its subject matter promised. I remember not being particularly impressed by it and found the whole thing a little dull and very dated, missing a lot of its subtleties that I only appreciated later on after some multiple viewings.

In Crusing, police officer Steve Burns (Al Pacino) goes undercover in the gay leather scene of New York City to catch a serial killer who is preying on its revelers.


It is an understatement that the film was not well received at the time of its release, despite the presence of A-lister Al Pacino, who spends the whole film looking like he is wondering what he is doing there, which is exactly how his character is supposed to feel.

Straight audience did not seem particularly interested in spending two hours in sweaty leather gay bars. And gay rights groups in New York got their (leather) knickers in a twist when they found out about the film, and did everything to disrupt the shoot. You have to put yourself back in the context to understand their reaction, at the time when the portrayals of gay characters were scarce, and not all that flattering. And their fear was, without even having seen the film, that it would reinforce people's preconception this leather scene was all that they were about, even though it only represented a minority within the minority.

But their intentions were misguided, and the willingness from any minority to concern itself too much with "positive" or "negative" images is not only extremely simplistic, negating the complexity of human nature, it is also almost a little dangerous, as if a certain part of the gay community was trying to be the moral police within its own scene. There is here a frank depiction of a certain kind of sexuality that is decadent but not in a way that I find condemning, more fascinating really. Ironically, the leather bar owners of New York were themselves all very enthusiastic in their response towards the film. 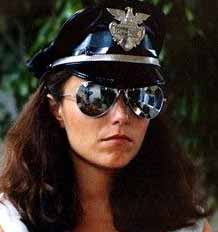 And while William Friedkin is clearly intrigued by this underground scene, I do not feel that the film offers a no judgmental look, it is merely content to observe it as an outsider (it is more the police force of the time which ends up with a very unflattering image!). It is all to its credit as a gifted director that he recreates this scene in a way that feels unusually realistic, having populated the bars not with actors but real punters as extras, and using his vast visual talent and a particularly effective work on sound effects (not to mention a fantastic disco sountrack) to give it a very atmospheric feel.

Besides, as compelling as it is, it is not this aspect of the film that warrants its high place on my list. What I love the most about it is that it is a momument of ambiguity thanks to its carefully crafted script, a case study of how to leave some questions unanswered without frustrating its audience. Nearly thirty years after its release, it is fascinating how polarised and torn the audience is on what actually happens at the end, with some stating their views on it with an unequivocal certainty, even though it is merely suggested and left to interpretation. 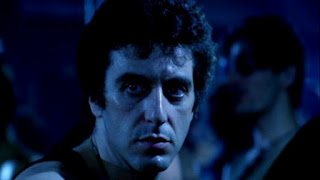 While the first half is more of a traditional thriller, in its style and plot development, the second half does everything to confuse the viewer, slowing down the pace and giving an almost dream like quality to the proceedings. There are even some frankly surreal scenes, such as an infamous interrogation one that culminates with Al Pacino's character getting a massive slap from a near naked towering man with a jockstrap who comes out of nowhere.

William Friedkin used different actors to play the killer to disorientate his audience further, and even has one them first play a murder victim then return as the killer's physical embodiment later on. The fact that these murders were inspired by real life events add some weight to the underlying proposition that this violence in here is the manifestation of hate towards the gays, sometimes even within their own community.

Al Pacino's performance is miles away from the shouty stereotype he became later on. He has to spend most of the film reacting to this new environment and all of his state of mind is solely expressed through his eyes. We never know for sure how he feels about this new universe he is exposed to, being unable to speak to even his wife about the case, the only brief but crucial comment he utters is that "this case is changing him". It is incredibly ballsy of him to take on such a part, that has him explore some of the deepest crevices of his character's subconscious with much subtlety. 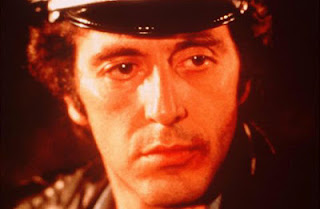 I have reassessed this film after rewatching it several times recently, and it remains as fascinating and unequalled as ever.

In our interblogs film challenge, Martyn Conterio picked The Isle as his number 7. You can read his post here.

Tomorrow at number 5, we will remain in a world of 80's neon lights and transgressive desire.