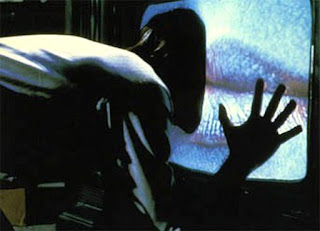 Probably a fairly obvious choice, just like number 8 before it, The Thing. But how could Videodrome not feature in my list at a high place, a film that has fascinated me ever since I saw some stills of it as an impressionable child.

In Videodrome, Max Renn (James Woods), a cable tv programmer always in search of some more extreme material, gets more than he bargained for when he is exposed to Videodrome, and sees the fabric of reality collapse around him as a conspiracy of mind control unfolds.


Remember when David Cronenberg used to be fun? Remember the 80's? I cannot really think of any other directors who showed such promise and such mastery of their craft at an early age and never quite managed to match their early height as David Cronenberg. It might seem a bit unfair as his career has not been such an embarrassement. But can anybody honestly say that any of his later films matched Videodrome, or that other masterpiece of his, The Fly? It was the heights of his career and it all went downhill after that.

Of course I did not expect him to do variations of his early work ad infinitum. Some of his recent films were interesting, such as A History Of Violence and perhaps Eastern Promises. And Crash was a rare return to form. But by trying to appear grown up, he lost what made him unique. And his latest, the terribly disappointing Cosmopolis (well for me anyway) is not filling me with much confidence for the future. 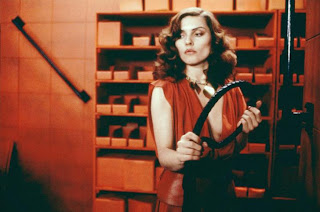 Videodrome had such an aura of mystery when it first came out. With a keen interest in cinema at a very early age, I remember flicking through film magazines and catching a glimpse of Debbie Harry in it, making it obvious that it was not a film I should be watching yet was dying to. It evoked a grown-up world of violence and fetichism that was totally inappropriate for my 8 year old self, and therefore wholly seductive.

And when I finally saw it, it did not disappoint, far from it, if anything, it was even weirder than I anticipated. Just like Scanners before it, it does sometimes feel like it was written as it went along, and many questions are left unanswered, but it somehow is of its strength, by refusing to give some easy answers yet never making the audience feel frustrated.

Indeed if there is an aspect of this film that makes it deserve its high post in my top 20, it is how bizarre the whole thing is. Its storyline involves such surreal and twisted plot elements as sado-masochism, a conspiracy by a shadowy organisation to control the population's minds and have TV replace every aspect of people's life, the mutation of the human body and technology, and the ascent of the human's mind to a higher, non physical form of existence. David Cronenberg keeps throwing red herrings there and then, and understanding what is real and what is not soon ceases to matter, as we are swept away by his fertile and twisted imagination. 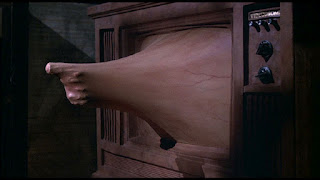 And he conjures some striking, iconic images, which now truly belong to the collective filmic memory. The "hand gun" (which was somehow referenced by the "teeth gun" from Existenz, what's next, the hair gun?!), the "stomach vhs slit", Debbie Harry and her numerous scenes of S&M (and THAT red dress), all the scenes with the television set mutating, and of course, manifestation of his predilection for body horror...

It is a film that remains topical, as we are about to enter a world of "augmented reality", something that frightens me no end (the thought of wearing glasses bombarding your sight with digital images and enhancement seems ripe for a whole lot of abuse). But esthetically speaking, this film truly belongs to its era, looking fantastically 80's, always a bonus in my book. Videodrome is a monument of the bizarre which rightfully deserves its high spot in my top 20 list. I include the trailer which is hilarious, adding some rather rudimentary digital footage which was not included in the film but has a certain retro charm to it.

In our interblogs films challenge, Martyn Conterio from Cinemart picked Across The Universe as his #8. You can read his post here