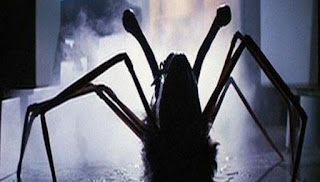 Not exactly the most original pick but yet again, this is my personal list, free of any kind of influence, and The Thing is by far my favourite horror film of all times, absolutely flawless and terrifying.

In The Thing, scientists in an isolated station in the Antarctic are stalked and slayed by an alien entity which can consume and replicate its victims, allowing it to remain unnoticed...


They just do not make them like this anymore... It might be hard to believe it now, but The Thing went through a rediscovery of some sort, after lying as dormant as the frozen creature in it that unleashes hell when awaken. I remember when I first discovered a wave of horror classics as an impressionable teen in the late 80's then early 90's, it was all about The Exorcist, Alien, The Texas Chainsaw Massacre... For whatever reason, in France anyway, despite John Carpenter's revered status as an auteur over there, The Thing played second fiddle to all these others and was not as widely known. 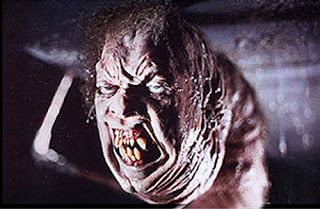 And having read about it before writing this post, I have realised that The Thing was actually not only a commercial but more unbelievably a critical failure at the time of its release, being deemed too dark, too pessimistic, and with serious critics seemingly unable to go past the gore. Fools!

What a shock when I finally watched it. A lot has been written about it by many better writers than myself so I cannot really write anything that has not been said before, with the BFI having published a book entirely devoted to it by respected film critic/horror writer Anne Bilson.

The Thing has all the elements of a great horror film: the isolated setting, the fear of the unknown, the paranoia, the complete lack of humour, the tension... This last element being particularly cherished, in a time when so many directors have succumbed to the school of ADHD editing.

John Carpenter here had found the perfect balance of slow, tensed scenes with short outbursts of violence, thanks to some incredibly inventive and still unmatched mechanical special effects of Rob Bottin. The grand master let his imagination run wild and unleashed some iconic and grotesque creations, like some Francis Bacon's paintings come to life : the "spider head", the frozen, merged two men...

The film has been seen as a metaphor for many things, the cold war paranoia, the beginning of AIDS... but you do not need to reflect upon those to enjoy it, it can just be seen as a slow burning yet terrifying film. And while the story of a creature/killer going after its preys one by one is not all that new, what makes all the difference here is having the creature being able to take on the physical appearance of its victims, adding a layer of paranoia, as the situation becomes incredibly more desperate and nobody can be sure of who is human and who is not anymore... It does help that at no point does the director tries to explain the origins of the creature, making it one of the most mysterious and malevolent ever created. 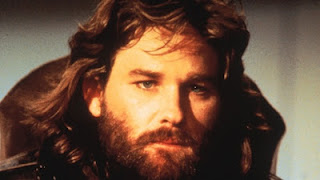 And among an all male cast, Kurt Russell shines, as the epitome of the 80's action anti-hero, rugged, bearded, and with big hair, reluctantly trying to save humanity but more importantly himself.

The Thing is a dark, atmospheric and gut wrenching classic, that has not been surpassed as far as I am concerned, with a fantastically bleak and depressing ending as the icing on the cake.

I will charitably not say a thing about the prequel, whose only redeeming feature was to show how the two men merged frozen Thing came about. There has been however a videogame released as some sort of sequel (as well as some graphic novel spin offs), which I would be curious to try.

In our interblogs films challenge, Martyn Conterio at Cinemart picked Le Mépris as his number 9.

Join me tomorrow for my number 7 and some more 80's shocks.