The Witch Who Came From The Sea

Some films are just so random that you do wonder what the director was smoking at the time. The Witch Who Came From The Sea is one of them, but not for the most obvious reasons.


The Witch Who Came From The Sea was one of the infamous video nasties in the UK, which makes me think I must have seen an edited version as the gore truly is not all that. Plus the BBFC was gravely mistaken about what the film is about, as this is no cheap exploitation film, rather, the exploration of a woman's descent into madness. 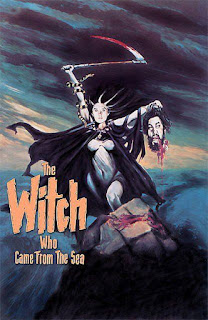 First of all I must comment on the truly baffling poster, which makes it look like a heroic fantasy film, which it is not! The woman in it looks like the kind of witch Conan the barbarian might stumble across, and I struggle to understand the connection with the actual film. Maybe it is meant to be metaphorical. Maybe the graphic artist never actually saw the film and based himself on the title alone for inspiration. A truly misleading title by the way. I hate to break it to you but there is no witch in this film. There is no sea either, only an ocean. What were they thinking?

So what makes this film so utterly bizarre? It is not so much a Lynch/Cronenberg/Jodorowsky's headtrip even though it does have its few striking images. And it is more random than bizarre. But what really makes it unusual is how its tone is completely at odd with what is going on. It has a very laid back, 70's groovy vibe to it despite the brutal murders. Molly spends the majority of her time downing pills and washing them down with alcohol. She has an abusive relationship with a violent man but does not seem all that bothered about it. There is some sort of swingers club from what I could ascertain although I could be wrong. Random characters come up with some even more random lines.

None of her friends and family members, while quickly realising what she is up to, seems all that bothered about her murders, it is almost as if they are just dealing with the slightly embarrassing alcoholism of an uncle or something. 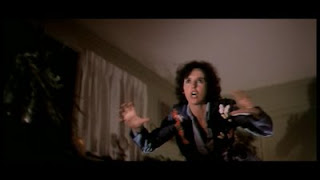 Interestingly, I noted that the lead actress Millie Perkins looked a lot like Isbelle Adjani, and in fact, this film did remind me of Possession for its depiction of a woman's madness and murderous mayhem, if you were to replace the green, slimey tentacled monster from the Andrzej Zulawski's film with 70's muscle marys.

The opening scene is a perfect example of the oddity of it all. Molly is at the beach with her nephews, while nearby, muscle men are working out. Except that she starts hallucinating, and the camera focus closer and closer on the men's growing bulges which are increasing to an almost comical level, culminating in visions of those men being slaughtered. As in, what?! I guess you could say it is an interesting metaphorical take on women's oppression!

I did a bit of a tweethaton while watching it, and the randomness of the film is perfectly evoked through them, so I have decided to publish them in their entirety below and in chronological order, as I was reacting to what I was seeing. They are spoilerific obviously, but they should not ruin your enjoyment too much as this film has to be seen to be believed. I called Molly "the witch" throughout just because it was catchy, even though she is no witch.

OMFG that opening scene of The witch who came from the sea on the beach is a bit mental. What with THOSE close ups? Naughty witch!


10mn in and the witch is downing alcohol with pills, having fantasies about muscle marys and showing her boobs. This film is AWESOME!


Now the witch is giving the muscle marys a crack pipe and telling them to "hop" on top each other. That's some crazy witch


Now she's sloooooowwly cutting a guy's leg off with a tiny razor blade. With her boobs out


Now the witch bit a guy's c&*k off and broke his fingers. In that order. What a weird, weird film


The old lady friend of the witch insists she's got crabs, not cramps, crabs. Yay more pills and booze now!


I know it was the 70's but a casual relationship with an old, abusive and violent man, and more pills, jesus!


Erm the witch's real name is Easter Bunny? Easy on the pills lady!


Witch to suspicious boss: "You look suspicious. Why should I go to Tripoli?" WTF is she on about?


Witch on the phone" I Love you. I love you on television" WHO is she talking to?! Who wrote THAT script?!?!?


So the witch's boss knows she's killed those guys. She's mildly annoyed about the whole thing but that's it


Hey, witch, when you shave somebody's balls, you're not actually meant to cut off his penis


Witch to husband as he wonders why she's covered with blood in their marital bed: "oh well sorry I was drunk"


"Why would I kill some football players? I don't even hate them!"


Lol the witch said she just needs to take MORE pills. And drink more. And then she can look after her kids that way
at 22:02