We have very nearly reached the top! The Thin Red Line is quite simply, the biggest shock I have ever had in a cinema. And while it finds itself runner-up to a number 1 who is where it is for very different reasons, I will never forget what an intense experience the viewing of this film was.

In The Thin Red Line, we follow a group of American soldiers during the battle of Guadalcanal in the Pacific during WW2.


I saw this when it was released back in 1999 in London, at the Odeon Leicester Square (at the time, the biggest screen in town), being unfamiliar with the work of Terrence Malick (and for a good reason, since he had been absent from the screens for decades), and I was instantly subjugated by its beauty, it raw poetry, and its unflinching celebration of life.

On a more personal note, this was a time when somebody close to me was going through an extremely difficult time, and I came out of the cinema completely transfigured, looking at everything and everybody around me with a renewed awe for life. It might all sound like the opening of a self-help book, you might have cringed a little when reading this, but this is what happened, this is what cinema can do at its best.

And while I am a big fan of anything sightly experimental and unusual, it amounts to very little if a film cannot find an emotional connection with its viewer, something that The Thin Red Line has in spades.

This film came out a few months after Saving Private Ryan, and a certain kind of media, always in search of a non-story, pitted the two against each other, as totally opposite views on how to make films. Yet there is actually an ounce of truth in this non-story, with the Spielberg film being the symbol of a certain kind of ultra efficient but cold and artificial cinema, and the Malick film the symbol of a more contemplative, philosophical and poetic side.

War is a deshumanising enterprise and while in other films it is often depicted as the fight and triumph of one group, being a battalion, an army, or even a whole country against another, what this film attempts is completely the opposite, putting the spotlight firmly on the personal and the individual. Characters drop in and out of the story randomly but it never feels frustrating, quite the opposite. Sometimes we might only spend a couple of scenes with one of them, but it is enough to find out about them. Against the countless and faceless victims of conflicts, here each character, no matter how minor, is as important and valuable as any other. And through constant monologues, we learn about their internal struggle, and their coming to terms with morals, death... as well as hints of their life back home through some subtle and wonderfully evocative flashback scenes.

There is as frightened and confused a view of a conflict as it must feel for any soldier, being the pawn of a giant game they hold no control over. Here most men do not even seem to know what they are fighting for, and there is no blind patriotism like in so many other war films, just a fight for survival, be it physical but also mental. 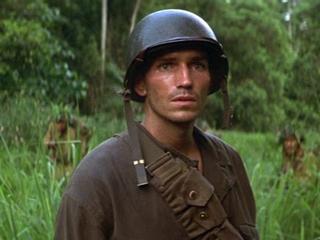 It is as if Terrence Malick has reconciled the very big (wars and their large scale conflicts) with the very small (the personal experience of everybody involved), something that he will attempt again later on a much wider scale with The Tree of Life. There is a beautiful scene where, during in a rare respite, a solider finds out reading a letter from his wife that she is leaving him. In just a few shots from back home, the director is able to evoke their previous intimacy and bond, and you can just feel his whole world collapse around him as the fighting is about to begin once more.

As for the visuals... What a beautiful and haunting experience the whole thing is. Taking its time over nearly three hours, a slow-paced running time which tried the patience of many, the film is just absolutely gorgeous and so utterly poetic, with a sumptuous cinematography, but never looking pretty for the sake of it. Terrence Malick is THE filmmaker of the witching hour. For all I know, he lives in an alternate plane of existence that is constantly set in the witching hour and is inimitable mark is apparent throughout. There is a pervasive celebration of nature, in all its beauty but also cruelty, that is unlike I have ever seen before. And he juxtaposes numerous lingering shots of nature through the film, as if to signify that it will still be there, long after humanity, its civilisation and conflicts are long gone.

And indeed, I read that, on the shoot, Terence Malick would sometimes wander off in the middle of a very complicated take, with hundreds of extras, gleefully telling the whole set "Have you SEEN this butterfly?" And follow it, keeping everybody waiting.

But it is not all pretty butterflies and lingering shots speaking volumes, it is still a war film, and the director show a great mastery of action scenes also, while putting its touch over them. Often, we find ourselves close to just one personal, and the disorientating and terrifying effect of being stuck in the midst of a deadly conflict, where men die completely at random right left and centre. There is in here one of my favourite and most incredible scenes I have ever seen: starting off with a close up of the half buried face of a dead soldier, with a few slight musical notes, the scene goes on a crescendo as a group of fighters approach an enemy camp and all hell break loose, while the music going progressively louder and more dramatic.

Speaking of which, praised must be placed over Hans Zimmer's contribution to the magic of its film, with a soundtrack that is an integral part of its success.

Among a fantastic, A-list cast, the then unknown Jim Cavizel stands out. It is interesting that he later on took the part of Jesus Christ as there is almost a messianic side to him, yet he is completely the opposite of a messiah trying to rally others around him. He very much lives in his own world and the actor gives an incredibly committed and intense yet totally unshowy performance.

A incredibly meditation that laments man's destruction of itself and nature, yet still celebrates the fragile beauty of life and human nature, The Thin Red Line is an astonishing achievement that proudly deserves its number 2 spot.

In our interblog films challenge, Martyn Conterio picked The Passengers as his number 3, you can read his post here.

And finally tomorrow, our favourite film of all times will be revealed... You should logically have guessed it by now but I shall not give any clue.