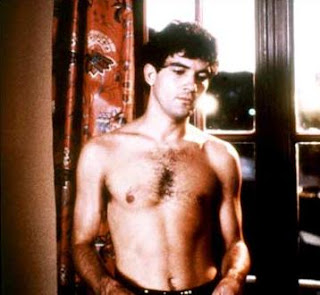 Nobody does passion like the Spanish, and nobody does better films in Spain than Pedro Almodovar. So one of his films logically finds its spot on my list, Law of desire, a film I adore with all the passion and fury of a latin lover.

In Law of Desire, we are thrown into a complex web of desire and unrequited love between film director Pablo (Eusebio Poncela), Miguel (Juan Molina), the man he loves but who cannot help himself not loving him back and Antonio (Antonio Banderas), who develops an unhealthy obsession over him.


I must have been 15 when I first saw this, on daytime TV in France (a very liberal bunch with their daytime programming over there). At the time, I had zero romantic experience, apart from kissing a girl called Kati in Germany when I was 13, and unlike Katy Perry I might have kissed a girl but I did not like the taste of her cherry chapstick. Yet this film had a huge impact on me, I remember finding the story particularly affecting, and despite knowing nothing about the matters of the heart, I knew instantly that this is exactly the sort of relationship I wanted, the passion, the intensity, the intimacy...

We certainly are spoiled for choice with the work of Pedro Almodóvar. And a Spanish friend of mine, rightly or wrongly, always gets a little annoyed that the world does not seem to know much about Spanish directors other than him. But the fact remains that he is responsible for some of the most consistently inventive and quality cinema over the last thirty years, with a very personal yet ever evolving style.

While his first few films, as funny and inventive as they were, seemed a little inconsequential, this was a marked step up, bringing some depth and sadness to his usual madness that was to permeate his subsequent work.

And Law of Desire is not just my favourite film of his, but quite simply, my favourite film about love and passion, a bold statement if there ever was one. I have never seen those two feelings depicted with such truth and honesty, in all their rawness, complexity and cruelty. Love is not convenient, it is not planned, just like the title states, desire has its own law that we are powerless to bend to our will. In fact, a more accurate title (if slightly less catchy) would be Quantum physic of desire, given its unpredictability. 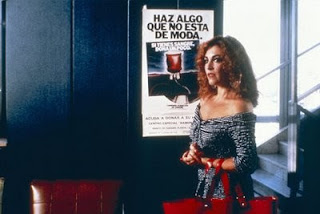 The sex scenes are brilliantly filmed, sexy, and totally natural (why is it so difficult to film a sex scene, they either fall on the embarrassing glossy side, or the clinically unsexy as in Catherine Breillat's films) but also those small and tender moments of shared intimacy that make up a believable relationship.

It has been hailed as a benchmark of gay cinema but I am not sure I agree. It was not as ground breaking as Brokeback Mountain was years later in the sense that it was not conceived with a broader audience in mind (I do not mean that negatively, I love Brokeback mountain) The film does not brace some issues about gay rights, and while one of his character is sexually confused, ultimately, this is a love story which can be enjoyed by all audience and this is the mark of all great films.

What I have always loved about Pedro Alomodovar is his particular skill to lay out out characters who feel real, no matter how extravagant. While too often films depicting any LGBT characters have a certain "Mancunian hen girls out on the piss in Canal St watching the gays for a laugh" side to them, even those directed by gay men, the Spanish director does not differentiate any of his characters. They might be eccentric, some might differ from the "norm" but then again, there is no norm in Almodovar's world, only different people.

Witness Pablo's transexual sister, Tina, played by the wonderful Carmen Maura. At first you expect her to play second fiddle to the men's love triangle, but the Spanish director manages to craft an absurdly dramatic yet beautifully multi-layered character who is not some sort of one-note comic relief but a tragic woman maintaining her dignity despite the numerous trials she has endured.

While we easily figure out what Pablo is all about, a slightly lost and rather selfish person, Antonio is  more of an enigma, as he is swept away by a new desire unknown to him. We know very little about his character, coming out of nowhere at the start of the story, with very little background except a slightly overbearing mum. He does not actually even seem to be gay, and one wonders if he knows it himself, blinded as he is by his new passion. 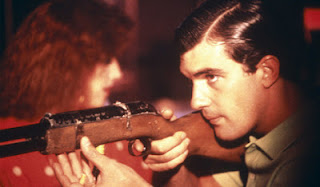 Of course, no matter how attractive being the object of such ravishing affection might seem, he is also the kind of needy nutjob you would probably avoid at all cost in real life, possessive, obsessive even, and ultimately downright crazy. And while at first seduced by him on a purely physical level (and who can blame him), and a little amused by the puppy love he is lavishing him, Pablo soon grows tired of him. Here passion is never shown through rose tinted glasses, unlike so many other films on the subject. There is a fine between passion and mental illness, which the film does not shy away from, as Antonio clearly looses the plot in a scary fashion and the film takes on a more dramatic turn as events unfold.

There are some who do not seem to realise how much depth there is to Pedro Almodóvar films, and the quality of his writing and direction under the flamboyance and garish colours however. His stories might be very melodramatic yet the feelings explored always feel terribly true. And watch this brilliant scene and tell me you will see anything better today, this week, this year, go on, tell me!

But he does not forget to be funny, especially at the start. It might not seem obvious, but Pablo was supposed to be a representation of himself. However, the director later publicly regretted that Eusobio Poncelas was so off his face during the shoot that he was not able to portray thet joyful and life loving alter ego that he had in mind. Never mind, here we see what his life as a hip and underground director in the post movida Spain must have been like, and frankly, I cannot think of any other place and time I would have loved to live in! It is so fantastically 80's, with the hipster fashion of the era, the bright colours, the neon lights, and the electro pop tracks, most of it taken from the director's own band, Almodóvar & McNamara.

The ending is one of the most beautiful and heartbreaking I have ever seen, as the two doomed lovers Pablo and Antonio are finally reunited for a brief moment. There can be no future, not even an immediate one, yet for Antonio, the intensity of his passion makes him decide that this is worth any sacrifice. Despite being well aware of the insanity of his lover, and having tired of him earlier in the film, there is something in the unflinching love of Antonio for him that finally touches Pablo. There is such a tender depiction of the last moments they spend together that is so affecting and moving, as if the world around them had ceased to exist and what may happen later does not matter, and they loose themselves into each other's arms for an hour of embraces that, to them, feels like time has stopped. 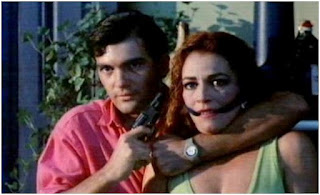 For whatever reason I was nervous rewatching this but a recent viewing has more than matched my memories of it, with the ending leaving me a blubbering mess. Love is at once the most common yet personal feeling, and I am sure everybody has got their own favourite film about passion but for me, no other film come close.

In our interblogs film challenge, Martyn Conterio at Cinemart picked Mad Max 2 as his number 4, read his post here.

Tomorrow at number 2, we will be engulfed by the beauty and violence of human nature.