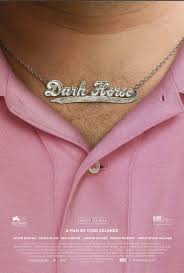 By now most of you will have either seen Dark Horse or skipped it due to so so reviews, but as a Solondz fan, I made the effort to see it recently. Well as the main character constantly drinks diet coke throughout the film, a good way to sum up the latest offering from our New Jersey depressive,is that it's like a diet version of what we have been used to from previous Solondz films.
Sure it has the usual collection of misfits, geeks and neurotic housewives set against an 80's style decor in the New Jersey suburbs, but this film lacks any of the punch that made ' Welcome to the Dollhouse' &  'Happiness' so brilliant.


I find that when the main character, in this case Abe (Jordan Gelber) is so completely unlikable, it does not bode well for the film. There is really nothing good about the selfish Abe, who sponges off his parents and works for his Dad's company doing very little. It is clearly representing the worst kind of American, that seems to have evolved due to over indulgent parents, and refuses to grow up. His main hobby is collecting model toys/figures and he makes several visits to Toys R Us. This wasteful type of consumption, where the toys are not even opened lest they lose value also shows how ridiculous society has become. 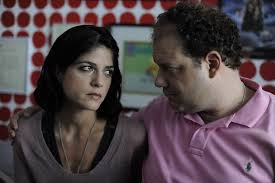 I love Selma Blair, who is great as the suicidal Miranda, the object of Abe's affection. He strangely decides that she is the 'One', after getting stuck at the singles table at a tacky wedding, and his courtship ensues. The mismatched couple is so unlikely that it just doesn't work, but as Miranda says after their first kiss, 'That wasn't completely horrible'.

Solondz has assembled a great cast, particularly Mia Farrow as Abe's nervous mother, pandering to his every whim, and tough guy Christopher Walken, as his father. Despite their comfortable lifestyle they are clearly not happy and rarely talk, a reality for many middle aged couples it seems. Donna Murphy plays the company secretary Marie. The scenes in her apartment are quite funny, and she is forever helping him out at work. Abe has a weird fixation on Marie and there are several dream sequences that for me I found awkward, as she switches from meek to vixen. 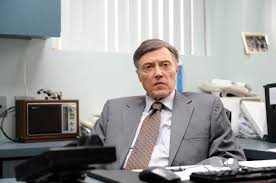 Solondz seems to put the microscope on family's so well, his own family must cringe when watching his movies. I felt though that with this latest offering the plot was only half done as instead of weaving between characters, everything revolves around Abe. Solondz seems to have toned things down so as not to offend people, as his last movies have done, but that's what made them interesting. Dark Horse is a somewhat gloomy look at life with not enough humour to keep the viewer interested.
at 18:02