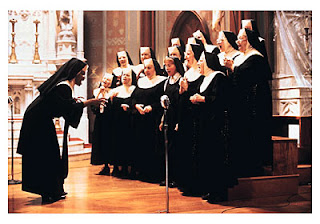 We are now entering the second half on my top 20, as part of our interblogs film challenge alongside Cinemart, and at number 10, Sister Act. Oh shush you, yes I know, Sister Act. If happiness was a bottle, Sister Act would be filled with fizzy soda that you shake and shake until it explodes, drenching you with bubbles of joy.

Sister Act has Whoopy Goldberg as Deloris Van Cartier, a lounge singer in Reno, who, having witnessed a murder committed by her mobster boy-friend, must be hidden by the police for her own protection before the trial. She finds herself in the place where she is deemed the least likely to be found, an inner city convent in San Francisco. Needless to say, her outrageous personality clashes with the strict rules of the Mother Superior (Maggie Smith).


Sister Act might well have been one of my most intense film experiences ever. I saw it in a packed cinema back when it came out in 1992, probably with fairly low expectations. Except that I might have found myself unwittingly sitting with the Whoopy Goldberg fan club for all I know because the whole audience was completely in love with her. 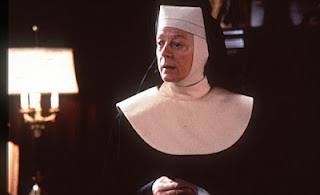 Quite simply, the minute she opened her mouth, or merely appeared on screen, they all erupted in raucous laughter, right from the hilarious opening number where, as a low-rent Reno lounge singer, she races through some great soul songs with her backing singers, a cheap shiny dress on and a hair bigger than Lisa Marie in Mars Attacks! And they laughed and laughed from start to finish.

Of course it is not sophisticated humour, there is not an ounce of irony and cleverness to it, which almost makes it one the last remnants of a certain type of 80's comedy. And I would agree that there are actually funnier films out there, such as Airplane, which nearly made it to my list. But what Sister Act has is the winning combination of some absolutely brilliant soul songs and some laugh out loud moments. It is a real shame I could not find a spot for such brilliant other comedies as Tootsie and Victor, Victoria, which are both probably better films, but there is something about Sister Act that gives it a special place in my heart.

Pitting Whoopy Goldberg as a loud cabaret singer against Maggie Smith as the strict mother superior has got to be one the best gift cinema has offered to its audience, and is pure comedy gold. Of course they clash, of course they learn to patch up their differences and make up at the end. 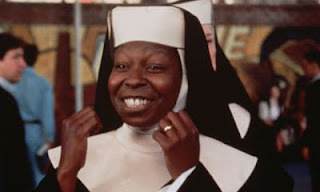 Whoopy Goldberg was on fire at the time, hot on the wheels of her Oscar winning turn as psychic Oda Mae Brown in Ghost, and here she gives all she has in an even better part. Yes she is over the top, grimacing and gesticulating all the way, yet I could not imagine anybody else but her transcending the material the way she does, thanks to her infectious enthusiasm and boundless energy. To think Sister Act was originally meant as a vehicle for Bette Midler!

It is a film that I have watched countless times and will carry on doing so. Whenever I am feeling down, I just have to think of the songs, of Maggie Smith's face when Doloris unleashes her new, less than traditional routine with the nuns at Sunday church, and I find myself humming along mentally (and sometimes not even mentally, if you ever hear somebody sing I will follow him, folloooooow hiiiiim in the London tube, chances are it is me.)

Yesterday, Martyn Conterio at Cinemart picked Colossal Youth, an experimental film I had not even heard of but which sounds rather fantastic, you can read his post here.

Tomorrow at number 9, we will be thirsty for blood.