Not Much Love For Beloved 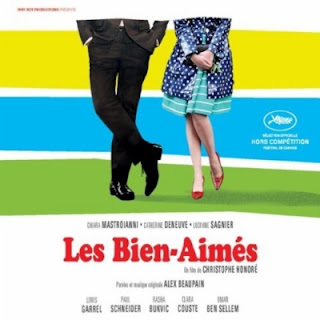 Les Chansons D'Amour is arguably Christophe Honore's most beloved film among his fans. So obviously when news emerged that he was at work on a new musical, Les Biens Aimes (Beloved), excitment was high, especially since it was to feature Catherine Deneuve and real life daughter Chiara Mastroianni. The film closed the Cannes Film Festival last year and did not seem to have much of an impact. It is finally out in cinemas a year later in the UK. So what is the verdict?


The director here attempts a more ambitious storyline, with a sprawling tale spanning two generations. In the 60's, Madeleine (Ludivine Sagnier), a shoe shop assistant in Paris, falls in love with Czech doctor Jaromil, who she follows to his home country. There she is torn between her philandering new husband and another man. In the late 90's, Madeleine (now played by Catherine Deneuve), is back in Paris and lives with her second husband and has a grown up daughter (Chiara Mastroianni) with some love life woes of her own, torn that she is between several men.

The film starts off well with a charming opening scene which echoes Jacques Demy's The Umbrellas of Cherbourg, all in colourful 60's imagery, a scene which, by the way is likely to give Quentin Tarantino a raging hard-on. I will not reveal why, you just have to watch it to understand, provided you are aware of one of his well-known festish... And early scenes with Ludivine Sagnier, are compelling enough, offering the promise of a sprawling romantic saga through the years.


A frankly embarrassing scene featuring a baffling musical number in a bar in London with Chiara Mastroianni howevers sets the tone for the tedium that is about to follow. And sadly the film quickly goes on a downward spiral and sinks lower and lower after that, never to recover. In fact, half way through its running time I had ceased to care completely. Why? 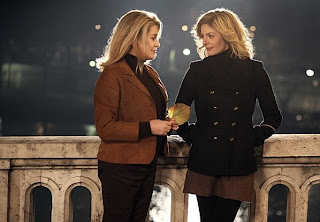 Because the film is an absolute mess, a random collection of vignettes, which do not constitute a storyline. The ambition is laudable but the director never spends enough time with his characters to develop them properly (why on earth does he insist in having the divine Miss Sagnier in his films if he is going to give her such short parts evert time!), the story is confusing and there is absolutely no emotional investment with any characters who seem to appear and disappear randomly. As an example, I still am none the wiser as to what Louis Garrel's character is supposed to be about or his function in the story. It is also baffling how the director seems unable to even pull off what is supposed to be a couple of rather dramatic and pivotal scenes, here filmed with all the aplomb and flair of a low budget TV drama.

And why have Catherine Deneuve if you are going to give her nothing to do? She does not have a single interesting scene in this. Plus the joke of having the grande Dame du cinema francais turning out to be a little slut has been done several times before and is frankly getting old. Yes we get it, Catherine Deneuve smokes weeds (Belle Maman) and sleeps with a lot of men (Potiche and now this). Hilarious.

As for the musical numbers, they simply do not work, which is all the most surprising as Honore pulled it out so well in Les Chansons d'Amour, a far more superior work which I cannot recommend enough. Who can ever the absolutely wonderful "Je n'aime que toi" scene in that film? Check it out on YouTube, or even better, rent the film! Here those scenes add nothing to the story, lack any kind of charm, and are little more than a jarring and unwelcome distraction. And the songs are actually quite rubbish. An example of lyrics: "Is it Oxford Street or am I sad? Is is the Thames or am I grey?". And before you ask, this is not a question of bad translation, the lyrics sound just as bad in French, although at least they rhyme!

To make things worse, there is catastrophically misguided attempt to use some of the events of the last few decades (the AIDS epidemic, 9/11...) as a background to the story which does not work at all.

It is such a shame, just when all you wanted is a French film that would sweep you off your feet like a brooding and charming Gallic lover, sadly you will not find this with Beloved. It is incredibly frustrating since I liked the idea of the film a lot. I wish Christophe Honore would start again and actually made the film he promised and failed to deliver.

Beloved has been out in the UK since Friday the 11th of May.