The Cannes Diaries: When It All Goes Right... 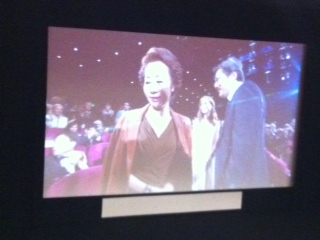 So our first day in Cannes yesterday was an unmitigated disaster. What with the storm of the century, cancelled screenings... It emerged today that the reason one of my screenings got cancelled was because the roof collapsed due to the bad weather! But thanks to a reversal of fortune, everything went right today, and the magic of Cannes was working overtime!


A leisurely early morning stroll to the Cinephiles centre brought a good omen. We were given two tickets to the Midnight Screening of the new Takashi Miike in the Grand Palais, even though we quickly realised that, while still staying in Nice, and with the last train leaving at 2330, it would be all but be impossible. Still, as the unseasonal cold and drizzle took hold of the city, we just thought we were going to try for the 1130am screening of the new film by Abbas Kiarostami, Like Someone In Love, shown in the Grand Palais as part of the official selection. And without invitations, the only way to get in was to beg, along with the army of cinephiles old and new trying their luck by the steps of the screening room, with a sign asking for a "petite invitation svp!" 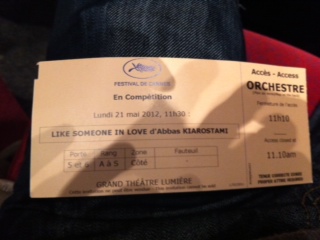 This is were we noticed what a great camaraderie there is among them. While technically we were all fighting for the same thing, within a few minutes, we all got talking, swapping tips and promised to help. And a friendly student, completely out of the blue, started a conversation with me and offered me two invitations: one for the 830am screening of Killing Them Softly by Andrew Dominik, starring Brad Pitt, the following morning, and even one for the gala screening of the new Ken Loach. I had to sadly decline the latter, the reason for this is that, unlike other film festivals, a gala screening in Cannes means a tuxedo or nothing. Still, a small victory. My festival companion scored an invite early on but I was still struggling. And a good thirty minutes before the screening, having chatted with so many people, including a very confused member of the Qatar Film Council on his first visit, I got handed an invitation for the Kiarostami.


With my last visit to Cannes being 14 years ago, and having thought for years then I would never go back, I cannot describe the feeling of walking in the Grand Palais in the Lumiere screen, arguably one of the biggest film theatres in the world, and watching the festival insert unfolds before the film. And let me tell you, the audience, in the day screenings anyway, is proper Cinephile. You are not allowed to eat, drink, make any noise, and even toilet breaks are frowned upon.

Abbas Kiarostami, after a rather misguided escapade in Tuscany for Copie Conforme, here went to Japan for this new film, with an entirely Japanese cast and crew, struggling to make a film in his native Iran, and wanting to show that emotions are international and that he is just as capable of making a film in any other country. I do not really want to divulge too much about the script, but basically the film follows a young Japanese student who moonlights as a teenage prostitute, her tempestuous relationship with her boy-friend and the night she spends with a new punter feeling all protective, an ageing academic.

I found this to be more accessible than earlier work from the Iranian director, with the story being quite straight-forward, even though his style of long takes and a generally slow pace is still very much present. The reception from the audience was lukewarm, yet I find it a particularly affecting work, with a rather devastating scene playing entirely in a taxi as the female lead Akiko (played with much subtlety by the rather fantastic Rin Takanashi) listens to several voicemails from her nan.

So it was all starting well, no matter what, our goal of seeing at least one film of the official selection in the Grand Palais was already met. Then we took a gamble. Rather than trying for Shining documentary Room 237 in the Director's Fortnight, we tried for In Another Country by Hang Sang Soo, with Isabelle Huppert, showing in the Grand Palais as part of the official selection.

A new feature of the festival is the "last minute queue" on the side of the Palais, which allows badge holders to get in at the last minute, subject to seats being available. It was all the more of a gamble as this was the only screening of the film, the 4pm slot being reserved to smaller films of the selection. That meant red carpet but no tuxedo required. We put ourselves at the front of the queue a good 90 minutes before the start, chatting to a lovely Italian filmmaker Filippio Zoli, and waited under the rain, waited, and waited some more...

Tension was rising as we saw the ever so delightful Isabelle Huppert walk down the red carpet... And then they called us! Ten of us at the front of the queue were ushered in the screen at the last minute, with seconds to grab a seat before the film started. While I have done several gala screenings at the London Film Festival, this is just in another league, with the glamour factor being incredibly high, as you walk up the step in front of a screaming crowd, in basically the biggest film festival in the world.


And what a delicious treat the film turned out to be. In it, a student imagines three different stories set in the same rather drab seaside resort in South Korea, featuring the same actors, sometimes playing the same part, sometimes different characters. The lead was played each time by Isabelle Huppert, playing a French director, then an adulturous woman and finally a recent divorcee. Such a brilliant actress, she brings an elegant touch to each scene. It is refreshing to see that such an established French actress is willing to take a risk on such an unlikely project.

If you have seen the wonderful previous film of Hang Sang Soo, The Day He Arrives, the structure might sound familiar and I was worried this might become almost of a gimmick for him. But the tone was much lighter and less melancholic, and this turned out to be a charming, bittersweet comedy, which, under its slight appearance, threaded some powerful themes of unrequited love, jealousy, and possesiveness, as well as the clash of cultures. Plus obviously, being a Hang Sang Soo film, it featured copious amount of social drinking, eating, and musing about love.

At the end of the screening, which received a huge applause, the cast and crew, sat downstairs, received a standing ovation, and, as a nice touch for those of us sat quite high up in the Palais, the whole thing was being shown on the screen, as per my picture at the top of the post. And there is one taken from high up where we sat. If you look closely, that blip with the beige dress is Isabelle Huppert.


So there it is, the magic of Cannes is back after all these years away. Tomorrow, the 830am screening of Killing Them Softly means a 530am wake up call to get there on time from Nice. And then after that, we will see where the day takes us!
at 21:17