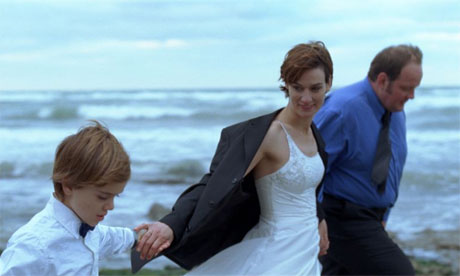 This is the powerful story of a mothers love for her son, and her desire to do whatever it takes to get him back. Set in a small fishing village in Normandy, Angel is a young woman who has just got our of prison and is trying to put her life back together. She moves to the village where her son is being raised by her parents-in-law, with the aim of regaining custody.


Unqualified and thieving, its hard to feel any empathy for Angel at the start, she comes across as a manipulative woman. She answers a personal add, and meets Tony, a local fisherman. He gets more than he bargained for in Angel, and it's the integrity of his character that forms the basis for her new life.


As they spend time together, we see a softer side to each and the burgeoning romance. Set against the gritty world of a fishing community, its a hard life to adapt to, but Angel's strength comes through as she devotes herself to the work and makes a new life for herself.

This is a story of love, loss and family. The most powerful human feelings, and its all shown with a fresh naturalness. I really felt the strength of a mother's love, and how it can be a driving force behind redemption. Clothilde Hesme is brilliant in the role of Angel. She has a subtle intensity that works perfectly with the somewhat sparse script.

This is a film about real people, and Alix Delaporte has assembled a wonderful cast. Gregory Gadebois, last seen in the 2010 film 'Gainsbourg', is excellent as Tony. He is totally natural as the lonely fisherman, with low self esteem, unable to believe that Angel, who is much more attractive, would want to be with him.

Nice to see an appearance by Lola Duenas. Slightly typecast as the 'joint smoking' Spanish girl, she brings a bit of light hearted humor to what is otherwise a very serious film. The other strong role in the film is that of Tony's mother Myriam, played by Evelyne Didi. She is the grieving fisherman's wife, coming to terms with her husbands death, and afraid to lose her son. The strong sense of community is shown amongst the woman, as they work side by side.

Delaporte's mother is from Normandy, and she grew up spending her holidays in a small seaside village not far from where the film was shot. She has created a story that is interwoven with her own nostalgia for the fishermen, and their lives. The ever present threat of danger, that is part of their lives and the loneliness is shown. Her desire to make a film that was stripped down to the basics with no special effects, has lead to a rawness that comes through in the life of the fishermen and their environment.

Angel & Tony was a sleeper hit at the box office in France, and did well at the Venice Film Festival. Due to be released in the UK on the 4th of May, it will also be out on DVD later from Peccadillo Pictures.
at 21:57