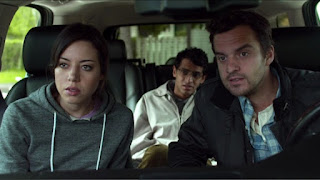 So Sundance made his first forey outside the US this year, and took residence at the O2 in Greenwich, London for four days. In true British fashion, we welcomed it with some of the worst weather we have seen in a very long time. No wonder our own independent film festival is called Raindance. To be perfectly honest, the announcement of the line-up originally failed to excited the crowd of movie-goers. lacking perhaps a few high profile arthouse names that we might be accustomed to with other festivals. But then this is what Sundance is all about, the discovery of new talents, so we all had to take a leap of faith. And judging by the near sold out screening I have attended, and the quality of films seen, the festival seems to have been a success. There was also something rather exciting about seeing several small, independent films in the biggest screen in London.

The first film I saw was a real crowd pleaser. In Safety Not Guaranteed, Jeff (Jake M. Johnson), a journalist from Seattle, travels to a small coastal town to investigate the author of a rather unusual small ad asking for a teammate to join him on a time travel trip, taking his two interns, Darius (Aubrey Plaza) and Arnau (Karan Soni) along. While Jeff's encounter with the author of the small ad leads nowhere because of his own arrogance, Aubrey's more low key approach allows her to win his the trust, and she finds herself developping a close report to the potential time traveller, a loner with a soft side. Is a lunatic, or is he on to something? And who are the mysterious "suits" who are after him?

Interestingly the first few minutes of Safety Not Guaranteed made me fear the worst, the sort of formulaic indie comedy which usually makes me want to run a mile. High concept? Check. Indie soundtrack? Check. Quirky female lead with a defensive facade against a world she failed to blend in? Check. Yet not only the director knows exactly what he was doing, his film is actually a supremely assured effort, with a great script that takes some unexpected turns and even risks a couple of unexpected tonal shifts. It is at once very funny and surprisingly moving, in great part thanks to its cast, lead by the fantastic Aubrey Plaza, recently seen in a small but hilarious part in Damsels In Distress. And 24 lovers, watch out for Mary Lynn Rajskub, in a small and very different role to her Chloe!

The second film, From Ellen, by So Yong Kim, could not not have been more different. Paul Dano (seen drinking Daniel Day Lewis' milshake in There Will Be Blood) plays Joby, a rock singer who goes on a road trip to meet his estranged wife and finalise the terms of their divorce. He soon discovers that he is to relinquish the parental rights of Ellen, his daugther who he barely knows. So no time travelling and quirky comedy in here. Instead, a slow paced, sometimes tough to watch drama which takes his time, and asks us to follow a rather unsympathetic character. While stories of messy divorces are nothing really new, the originality in here is to have the character of the dad as a young rock singer, somebody who seems far too young and immature to have even been married, let alone have a child.

Over the course of the following days, Joby attempts to get closer to his estranged daughter which, in a schmaltzy Hollywood film would sound like a recipe for projective-vomitting, except that in here all these scenes ring perfectly true, and all of their harshness and awkwardness, thanks to the fantastically naturalistic performance of Shaylena Mandigo as the young Ellen.

Filmed in a nondescript small town, this might be a slow burner, yet it proved to be surprisingly rewarding and moving. It might not be the kind of film I would wish to watch over and over again for its unflinching, pacey tone yet I would most definitely recommend it.

On a personal note, From Ellen's talented director So Yong Kim turned out to be my fairy godmother at Sundance. On top of making a challenging but great film, finding myself queuing behind her for another screening, she offered me several free tickets for other films at the festival!

Join me on my next post for the three other films I saw at Sundance. Well two and a half anyway, I ran off from one of them. (Spoiler, it was set in New York).