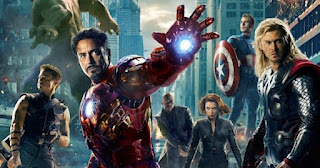 It is hard to believe it but it was only four years ago that we were given a hint that the Avengers were on their way to assembling, in the post credits scene in the first Iron Man. Since then, Marvel has managed to establish Iron Man as a successful franchise, as well as launching two more characters from the Marvel universe within a very short period of time. Yet it was still a risky enterprise to start production on the Avengers without knowing if the public were going to favour Thor then Captain America which opened within a few months of each other last year, a big gamble if there ever was one.


It is all the more remarkable as, unlike DC comics characters such as Superman and Batman, early attempts at adapting Marvel characters all failed spectacularly due to inadequate budgets, the technology not being quite there to achieve the required special effects, and a general lack of respect for the source material. But of course that trend was buckled over a decade ago with Spiderman and the X-men setting up a new blueprint for a successful Marvel adaptation. And then, on top of Iron Man, both Thor and Captain America did some brisk business at the box office last year, as well as garnering some very positive reviews.

However the path to this new film assembling all the heroes was still only half won, even with most the characters already successfully set up. They might all be superheroes from the Marvel universe but each film had a very different tone and universe: Iron Man is the James Bond of the superheroes, a more suave and grown-up (well, sort of!) character. Thor lives in a world that is part Shakespearian tragedy, part heroic fantasy. And Captain America has a blend of old fashioned patriotic heroism with a tinge of melancholia to him. So how were these three largely different characters going to work on the same film? Not to mention the need to introduce two lesser known members of the Avengers squad (Black Widow and Hawkeye, only just glimpsed at in previous films), as well as the reintroduction of the Hulk after two less than successful attempts.

And if it was not a challenge enough, the direction of this superheroes juggernaut was handed over to Joss Whedon, who might as a cult following among tv fans, as the creator of Buffy, Angel, and Firely, but only had one medium budget to his name (Serenity). 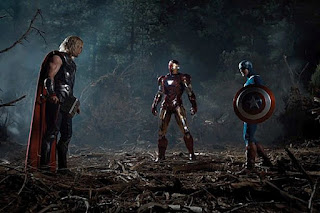 So what is the verdict? Well I am pleased to say that the film is a sterling success, one of the most entertaining superhero film that has ever graced our screens.

In Avengers Assemble, Nick Fury (Samuel L. Jackson) from the secret S.H.I.E.L.D. organisation, is forced to call on a motley crue of superheroes when Loki, having been exiled from Asgard, threatens Earth with an alien army under his command.

Joss Whedon tackles the challenge of assembling this mishmash of characters head on by making it the film's main narrative point. Yes all these characters are all very different and come from different worlds, but this is what the film is all about. As you can imagine, putting such a variety of heroes together does not go smoothly at first, with a lot of ego being bruised, and there is something almost ridiculously entertaining about watching Thor, Captain America, the Iron Man etc... not only interact in the same film but actually fight each other on, in scenes that almost made me want to applaud several times.

The strength of the director is that he did not try to adopt any of the style of the previous Marvel adaptations but made this his own film instead. Yes all the characters are instantly recognisable, but as part as this new squad, the all appear like fishes out of water, and they have to learn to put their differences aside and team up, and this is how you realise that the British title, Avengers Assemble, is not all that dumb after all. 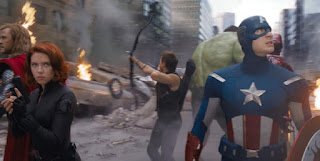 And Joss Whedon shows that he is completely comfortable with the demands of a big budget. There a couple of extended set pieces that are absolutely incredible, with some full on action, especially a mad third act with New York under siege from an alien force.

This genre is not exactly renowned for their acting but all the talent assembled in here is essential in the success of the film. Be it the suave Robert Downey Junior, the very earnest and heroic Chris Evans and Chris Hemsworth, and the mischievous Tom Hiddleston as their nemesis Loki, the whole cast positively shines.

And in what can be seen as the anti-Michael Bay, characterisation is just as important as the action, from the dramatic sibling rivalry of Loki and Thor, to Captain America still coming to terms with living in a new era, and having all those he knew and loved gone, these are characters you actually care about, and root for.

As for Scarlett Johansson as Black Widow, unlike Iron Man 2 where she was relegated to the background, here her character truly comes to life and despite possessing no superpowers or even a supersuit, she more holds her own among this motley crue of testosterone heavies, and benefits from Joss Wheddon's penchant for strong female characters.

Jeremy Renner as Hawkeye however is not quite as lucky, and while an effort is made to create an interesting backstory that involves Black Widow, he is probably the character who is given the less to do, which is a shame as we have seen how comfortable the actor was with action in Mission Impossible 4. His time to truly shine as a blockbuster lead will more certainly come later in the year with the Bourne franchise.

As for the Hulk, he is finally given the screen incarnation he deserved. The underused Mark Ruffalo here shines with a brilliantly layered performance that he at once subtle yet bubbling up with underlying rage until the big green beats unleashes, in a very satisfying motion capture performance.

Oh and did I mention how funny the film is? Comedy is always a little risky in blockbusters as it risks jeoparidsing the sense of threat, and I have to admit there are a couple of occasions where the film does cross that line. But whether it is some killer line or just some slapstick, the film is incredibly funny, with the Hulk getting two of the best and funniest scenes. 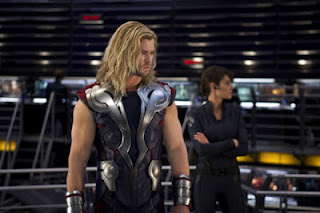 While I am at it, I might as well come clean and come up with the few more minor squibbles I had. Despite featuring some already established characters, Avengers Assemble does sometimes feels like an exposition film, with the need to present all its characters as a team. And if anything, the narrative arc is a little simplistic. Also, the army of baddies that Loki unleashes on Earth (I will not spoil them) is a little generic and not that formidable a threat. Finally, the film cannot quite compete with the emotional depth achieved in Xmen 2 and Spiderman 2. But then nor is it trying. Its ambition to be a fantastically entertaining action film that respects his audience is more than fulfilled, and I cannot see how anybody would fail to enjoy Avengers Assemble. It is a fantastic achievement, a case study on how to make a successful blockbuster that is fast paced and entertaining while still respecting such old fashioned notions as characterisation and a decent storyline.

One final note actually. There has been a lot of talks recently about trailers showing too much, with Cabin in the woods being a prime example, but no such thing here. Never did I feel like "the best bits were all in the trailer", so you can watch it with confidence, it shows enough to whet your appetite while keeping all the surprises intact.