Nicki Minaj Is A Picasso Warlock 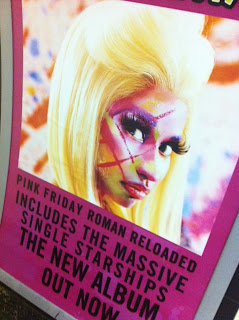 Some of you might remember the terrible 90's horror Warlock: Armageddon, sequel to the abysmal Warlock, in which Julian Sands plays a Warlock, hellbent on unleashing the Armageddon. (You cannot accuse the title of false advertising!). You probably all know the rather fantastic, witty and talented rapper Nicki Minaj. Yet the universe of Warlock: Armageddon and Nicki Minaj have collided in the most unexpected and frightening way today!


While Warlock: Armageddon was a really bad film, and rather typical of a certain type of dull and unambitious horror films of that era, it did have something going for it: some of the most imaginative and gruesome death scenes I have ever seen. They were not so much gory as just rather twisted, as the Warlock took a sadistic pleasure in torturing and tormenting his victims, while trying to retrieve some magical stones.

And one of the scenes that has sticked in my mind (and traumatised many others judging the comments still going about it on the IMDB boards!) had him visit an art dealer who owned one of the stones he was after. With the man unwilling to just give it to him, the Warlock promised him he would trade it for a unique piece of art. He then proceeded to turn the man into a Picasso painting. Yes you have read this right. Through his evil magical powers, he twisted and twisted the man's face in a grotesque shape, adding garish colours until he turned into a living, breathing human Picasso painting. I could not find a still of he result but did actually found the whole scene on YouTube. But what does all of this has anything to do with Nicky Minaj I hear you say! Well watch the scene, then read the paragraph below.


Now imagine my surprise when I bumped into that picture of Nicki Minaj on the tube today, in her new album, as seen on top of this post. The shock, the horror when I realised that the Warlock got to her. She looks like her face has been twisted into a Picasso, in the same way that the aforementioned victim was in the film. She looks like she has been thrown into and spat out by a Rubik's cube maker, her head twisted, scratched and painted like a canvas that Picasso would have got over-enthusiastic over. Was it the price to pay for her success? Was she in possession of one of the magical stones? Is the Armageddon (also known as the London 2012 summer olympics) upon us?
at 21:26