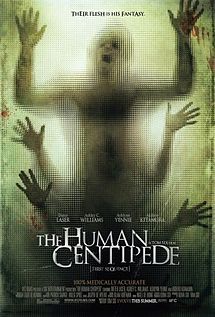 So I am very late with the Human Centipede party, as I have only just now plucked the courage to watch the first one, when many of you are trying to recover from its much worse sequel. I would have loved to watch this with the most amazing audience in the world in Frightfest but life has decided that I would be watching this by myself like a saddo on a Friday night. Ah well! Join me for this constantly updated live vomit-along!


0:01 Six Entertainment presents. I am not sure how much entertainment this is supposed to be! But then the man brought us the projectile vomiting inducing Big Brother in its first, Dutch incarnation

0:02 The weirdo in the car is looking at pictures of dogs doing what dogs do best... I'll leave that to your imagination...

0:03 I take it this is Dieter Laser. Either this is some pretty groovy acting or I'd would never want to bump into that person in a dark alley, he is SCARY

0:04 Mmh ok so let's just kill somebody for the sake of it

0:05 The traveling American youths in scary parts of Europe. Have they not SEEN Hostel! No sweetie you are not in Germany, you are in Netherlands!

0:06 Would you go to a Dutch/German club called Bunker? No, me neither. A little scared to turn up the volume considering what is coming up but cannot hear the dialogues much. I am not missing much am I?

0:07 No signal, that old chestnut! Is the acting SUPPOSED to be that bad? Because even within the horror genre, we are hitting rock bottom so to speak.

0:08 Oh it sounds even more attractive when some old disgusting man talks dirty in German.... NOT!

0:11 Oh but of course, we are lost in the woods and this scary looking house in the middle of nowhere is the PERFECT place to go now, especially when you are two attractive young ladies!

0:15 The reptilian old man staring at you asking you weird questions, ignoring your requests to call for help is nothing to be concerned, yup, nothing at all.

0:17 "No, I do not like human beings". Always a great ice-breaker in the presence of strangers.

0:20 Eek the needle in the neck... Had to look away for the first time, and not the last I suspect!

0:22 Hang on I thought the head of the centipede was going to be a Japanese man. I take this will not end well for this rejected "head"

0:26 They say traveling open up the mind. I have a feeling these three will have something else opened up

0:27 Well say what you want about Dr Laser, but his makeshift operating room seems a lot more pleasant than the NHS ward I was unfortunate to once spend the night at

0:28 Erm I do not mean to rain on your parade Dr Laser but the Japanese man does not speak English so your little presentation is lost on him

0:29 Okaaaaay this is sick now. Beginning to regret that Quarter Pounder deluxe with bacon I just had

0:30 Creating... dum dum dum... The Hum, what? The Siamese Triplets? Dude, you got the name of the film wrong! Ah, there you are, the Human Centipede!

0:31 You know how in films you really, really want somebody to escape, only you just know it is not going to happen? Well this is that moment.

0:34 "Let me and Jenny goooo!" Oh real nice lady, you can keep the Japanese man is what you are saying, real, real nice

0:37 Mmh this is dragging a little bit... Tom Six obviously does not have the faintest idea about building up tension

0:43 Have you ever watch a German tv police serie? Because this is looking as sedate and badly shot as one of them!

0:44 Eeeeeewwwww argh the teeth, not the teeth! The noise alone is making me sick!

0:45 Oh my god I thought this film was not supposed to show gore, it was all suggested my friends say eek

0:46 Arrghh the centipede! This is just grim, grim, grim!

0:49 Disturbing images of the human centipede for sure, yet there is now a certain twisted, grotesque poetry to it all.

0:52 For the man who has everything and every pet imaginable, I present to you, the Human centipede! Will bring you your paper every morning

0:55 I'd better warn you people, I am feeling queasy and I have yet to witness the first bowel movement

0:56 Nooooooooo it is happening! "Feeeed her, feeeeeed her" Argh no this is too much

0:58 THE sickest shot of the film so far: Dieter Laser swimming naked

0:58 I have said it earlier but there is a certain twisted poetry to it all. Francis Bacon would have approved

0:59 Oh yes some spanking, lest we forget we are in Germany. Or Netherlands.

1:00 "Laxatives" The word I was dreading

1:00 Ewwww what is that yellow substance coming out of her disfigured mouth? She is very sick indeed!

1:01 I feel like crying a little bit. Or throwing up. Perhaps both

1:02 Did you have Inspector Derrick in Britain? Because those two bumbling inspectors are like the Thompson twins if they were German

1:03 Hey, teachers! Struggling to get you student interested in the language of Goethe? Show them The Human Centipede, it's got parts in German!

1:07 I certainly do not mean to complain but was still expecting more bowel movements.

1:09 He has lost his human centipede which is crawling somewhere in his house! And to think I'm scared when I loose sight of a spider

1:12 Push! Push! Might not be the most appropriate words given the circumstances

1:13 Eeewwww licking the fresh blood out of the recently discarded kneecaps, lovely

1:15 Right the human centipede is not quite ready for synchronized swimming, their coordination needs some attention

1:18 Hearing the Japanese dialogue makes me think how I can totally see how Takashi Miike would have made such a better film out of this

1:19 This profound, philosophical moment of the head of the centipede who chooses death rather than face the ugliness of the world felt rather flat. And STILL no bowels movements!

1:20 Why is Dr Laser crawling? Did he spontaneously eject his own knee caps?

1:22 This was rather disturbing when the inspector faced the centipede for the first time! Shame the film did not have more scenes like this one.

1:24 Mmh ok so they are all dead bar the middle and the rear of the centipde... What exactly will happen to them?

1:26 This scene of the two girls holding hands yet again is rather touching, and I mean it, such an infinite sadness in the face of horror

1:28 This is just really sad, incredibly sad as the center of the centipede is left all by herself, doomed...

Well what a bitter disappointment this turned out to be. Although perhaps I should have been a little braver and actually faced it (so to speak) when it came out. Having read so much about it have most obviously dimmed its effect. And the bodily fluid horror I was fearing had nothing on Pasolini's Salo, being only really suggested.

There were some very rare inspired and disturbing scenes, a couple of rather moving ones also, and of course credit to the director to have thought about this mad, mad concept. But mostly this was just dull, lacking any sense of tension and atmosphere. And I just dream of what somebody like David Cronenberg in his heydays would have made of this. Perhaps I should brace myself for the allegedly much, much worse sequel. So join me in my Human Centipede 2 vomit-along! (As soon as Lovefilm sends me the disc)