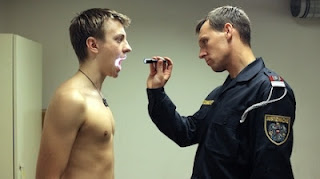 Using a realistic style very much in keeping with the Dardenne brothers recent The Kid with a Bike, director Karl Markovics Breathing is a pared down Austrian film about Roman (Thomas Schubert) a 19 year old who has grown up in an orphanage and has been placed in a juvenile prison after the death of a boy following a fight when Roman was 14. Roman’s case is still pending while he begins a job as a state undertaker, returning to the juvenile detention centre at night.


Though on the cusp of becoming an adult, Roman is still a boy and when we first meet him in the film he has not yet learnt to go beyond his boyish instincts to fight or flee from his problems. There is a constant theme of breathing in the film as we see Roman’s lonely swimming in the pool with his fellow in-mates waiting for him to be gone rather than include him in their group. Roman either practices staying without air under water or struggles to control his breathing when swimming. He then begins to deal with people who, being dead are no longer breathing and who cause him to have to change how he breaths when near the smell of their decomposition.

Keeping a style of understatement, we see Roman’s older co-workers guiding this damaged boy and gradually teaching him how to behave and accept an adult responsibility such as respect and care of the dead. As well as Roman dealing with his first taste of an adult life, he also searches for the mother who abandoned him wanting to know why she left him to a life of social care and isolation. Tracking down his mother Margit (Karin Lischka), she realises who this young man is but does not admit it to herself as they spend a day together with Roman helping her to pick out a new mattress. Margit looks barely old enough to be Roman’s mother and her messy apartment along with the large cold sore on her mouth manages to signal to the audience that she is very much human with human flaws.

Thomas Schubert’s central performance is outstandingly understated. Adolescent fears, frustrations and awkwardness play out on his face with scenes of restricted or abundant breath being emotional triggers expertly acted by this real acting talent. The supporting cast are all strong but the film is really stolen by Schubert’s Roman as emotional turmoil and the pain experienced by a damaging childhood are faced. Again as with the Dardenne brothers The Kid with a Bike Markovics does not defer to simple sentimentality to achieve the emotional beats of the film. When the theme of breathing is explained it is both startling and handled without fuss or orchestral music. By the end of the film, we come to have a better understanding of what might be beneath the surface of someone who at first seems written off by society from the get go. This is a well crafted thought provoking film with a central performance one can but hope launches Thomas Schubert’s career into the future.