This Must Be The Place Review 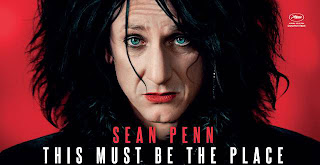 Please someone get the makeup remover fast! Sean Penn looks and sounds ridiculous in this film from Italian Paolo Sorrentino. I can understand that Sorrentino went through a goth phase and he loves Robert Smith, but that's no reason to make it the basis for his first film in English and does not bode well for the future. Imagine you get financing and assemble a great cast including Frances McDormand, Judd Hirsh, and Harry Dean Stanton, then you foolishly allow Sean 'I am the greatest actor' Penn, to have loads of creative input and ruin it all. Don't let my own biased view of Penn put you off, I thought he was wonderful in 'Milk', but this movie just doesn't work. The script co-written by Sorrentino and Umberto Contarello just doesn't translate well on screen.

The story starts in Dublin, where washed up ex rocker Cheyenne (Penn) lives with his wife Jane (McDormand). He appears to have been drifting along in a fugue of glumness despite his obvious past success and now spends his days hanging out with teen goth girl Mary (Bono's daughter Eve Hewson) at the local mall. So far so dull. Upon hearing of his father's illness back in New York, he make's the decision to travel back and see his estranged father. Cheyenne has a fear of flying though, so decides to make the journey by sea, and this offers some great shots of the arrival into New York by boat with the skyline glittering in the background. As you can imagine this is not the quickest way to travel and his father has already passed away by the time he gets there. Our mumbling, bumbling mega wimp just ambles along though, and ends up finding out that his father had been on a life long hunt for the Nazi guard who tormented him at the prisoner of war camp he was in during the Holocaust. Part of the story is about Cheyenne's lack of any kind of bond with his father, and he attempts learn more about the Holocaust and what his father went through.

For a lead character to be so directionless up to now, he suddenly decides to continue the search and consults top Nazi hunter Mordecai Midler (Judd Hirsh). As you can imagine they don't exactly see eye to eye and this leads to some friction along the way. The plot twists at this point are so annoying and unbelievable. As we follow Cheyenne across the midwest and down to the desert, the film becomes more about Sorrentino's personal desire to throw all the classic USA images onto the screen, which to be fair he does excellently, but he forgets about the story. The cinematography is impressive with plenty of beautiful images of the wide open landscapes.

Thrown into the story, we have a cameo from David Byrne as himself, and old friend of Cheyenne. The title comes from a Talking Heads song 'This must be the place', and just to remind us of this we are treated to a concert shot with a performance from Byrne. Later their heart to heart shows us how depressed Cheyenne is, whilst Byrne, resplendent in a sharp white suit is the exact opposite - happy and successful and still performing. The exact cause of Cheyenne's depression is touched on via the back story in Dublin, where Mary's mother sits chain smoking at the window waiting for her son to return, and visits to a grave.

I haven't seen any of Sorrentino's other films, but it was based on their success and in particularly 'Il Divo', that got the attention of Byrne and Penn, and set the ball rolling on getting this film off the ground. Part of me thinks its the clash between the Italians and the American/Irish cast that created this mix mash that doesn't work. Its a very self indulgent project and one for the die hard Penn fans only.

This Must Be The Place. Directed by Paolo Sorrentino. Starring Sean Pean, Frances McDormand... Out in the UK on the 6th of April