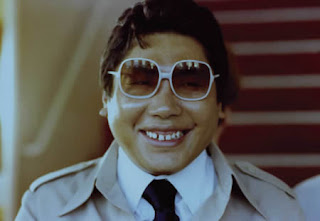 FilmLandEmpire are always interested in attending film festivals, so we were particularly excited by the prospect of the International Buddhist Film Festival (IBFF) in April of this year. Though normally a US based festival, the IBFF decided to host a Buddhist film festival in London for the first time since 2009. Consisting mostly of documentaries including Tibetan, Chinese and Japanese Buddhism and Buddhism in the Western world, the festival offered a wide range of subjects from a variety of film makers with Buddhism as their central topic. With 12 films to choose from, FilmLandEmpire took in five films to get as broad a feel for the festival as time would allow.


Two films which act as interesting separate documentaries but also as intriguing companion pieces are Tulku and Crazy Wisdom.  Crazy Wisdom directed by Johanna Demetrakas is a feature length documentary about the life of Chogyam Trungpa Rinpoche. Trungpa was a highly respected Tibetan Buddhist teacher who in 1960 along with 300 others fled from the Chinese invasion arriving in India 10 months later with only 13 of the original group still alive. Trungpa was a co-founder of the first Tibetan Buddhist centre in the West, inScotland. Though educated within the rigors of the Tibetan Buddhist system, Trungpa was not interested in maintaining a monastic lifestyle. He challenged his community and the concept of what it is to be a Buddhist teacher by wearing Western clothes, openly smoking, drinking to excess and having many relationships with students along with marrying his English wife when she was 16. With an interesting array of interviews from his students who knew him at various stages of his life in the West as well as interviews with his family members, Trungpa is shown to have been undeniably a great teacher as well as uncompromisingly his own authentic self. The title of the documentary is explained and expanded upon during the film and we are challenged to consider what we think is either crazy or wisdom.

Tulku directed by Gesar Mukpo, 34 years old when making the documentary, offers another perspective on Buddhism and particularly on the spread of Buddhism in the West. A Tulku under the Tibetan Buddhist system means a recognised reincarnation of a teacher in a young child. Gesar Mukpo is the second son of the aforementioned Chogyam Trungpa Rinpoche with Gesar  recognised as a Tulku at the age of 3. However, with an English mother and growing up in the States and Canada, Gesar explores what it is to be so revered in the Buddhist Eastern culture but a child of the West. Gesar’s father did not want him to have to endure the harshness of traditional Tulku training under the Tibetan system but without formal training, what does it mean to Gesar to be a Tulku?

Gesar seeks out other Western tulkus which include his own younger half brother Ashoka Mukpo, 20 year old Wyatt Arnold along with Tibetan teachers such as the very straight talking Dzongsar Khysenise Rinpoche and His Holiness Ogyen Trinleyderje. Trying to see themselves as ‘ordinary’ people becomes somewhat of a challenge when the Western tulkus make journeys to the East with people lining up to greet their former teacher in their new reincarnated form. Some of the Western tulkus have pursued Buddhist study to various degrees with Gesar having spent a year in a Nepalese monastery when he was 15.

Being from a Tibetan Buddhist family, Dzongsar Khysenise Rinpoche did undergo the full Tibetan tulku training and though a revered Buddhist teacher, he is very open about questioning the wisdom of declaring Western born tulkus. With a childhood without toys and with only one day a year (New Years Day) allowed away from study, Dzongsar sees a positive side to the change in the traditional system of educating tulkus. There is a striking bond between Gesar and all of the tulkus that he interviews and the humour of Gesar comes through along with the weight of responsibility and expectation placed on the young shoulders of all the tulkus interviewed. The consequences of Tibetan Buddhism going beyond its borders and into the West due to the Chinese invasion in 1959 is given an interesting perspective through the eyes of the next generation in Tulku.

My Reincarnation is a fascinating documentary by Jennifer Fox that transverses twenty years, 1989 to 2009 focusing on the story of Tibetan Buddhist teacher Namkhai Norbu Rinpoche and his Italian son Yeshi. Settling in Italy after escaping Chinese invaded Tibet, Namkhai began to teach the hitherto secret Tibetan Buddhist teaching of Dzogchen. Married to an Italian and with a son and a daughter having a ‘normal’ family life with hundreds of his university and Buddhist students visiting Namkhai, Yeshi resented his father for not being ‘just’ his father. To complicate the relationship for the Western born Yeshi he is also a recognised tulku. Not only a tulku but said to be the reincarnation of his fathers beloved teacher and uncle. With his father treating him as a Buddhist master and not as just his son, we first meet Yeshi as an angry young man who barely visits his father and looks deeply uncomfortable being in the world of and so connected to a revered Rinpoche. Complaining that his father ‘only listens to me’ we see Yeshi pointedly go into a Western world occupation working his way up the corporate ladder within IBM. Any visits Yeshi pays to his parents are tense affairs from Yeshi’s side, though his father and mother always treat him with patience. Due to Namkhai health and size, we often see him enjoying swims as a safe form of exercise.

When in the water there is a wonderful lightness of being to this teacher compared to his regular day when he is so inundated with requests from his students. As a result of his fathers failing health, Yeshi gradually becomes involved in organising the ever expanding and unorganised Dzogchen world wide community. With slow steps, Yeshi finally begins to understand his father and without any fanfare from Namkhai, begins to become a student rather than an embittered son. Coming to terms with who he is, Yeshi’s evolution over the 20 years from angry young man to a Western Buddhist teaching large groups around the world is intriguing. The transformation in his attitude and approach to his father is especially touching as we see the patience of his father paying off. By the end of the documentary both relate to each other as family and as intertwined teacher/student under the Buddhist concept of reincarnation. 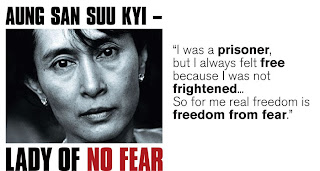 Aung San Suu Kyi; Lady of No Fear by Anne Gyrithe Bonne looks at what it has been to be a family member and friend to the Nobel Laureate in and out of house arrest in her native Burma since 1990. The story of Aung San Suu Kyi’s peaceful fight for democracy in Burma is now well known. What is less well known is her life prior to her first political speech against the Burmese military dictatorship in 1988. Having studied in Oxford University Aung San Suu Kyi met and married Michael Aris a brilliant Burmese and Tibetan scholar. Though making it clear to her husband that if her country ever needed her she would return to Burma, ‘Suu’ as Michael called her was an Oxford housewife raising their two sons and supporting Michael in his academic career.

With interviews from long term English friends, greater insight is gained about a woman who does not give personal interviews and is known mostly as a political leader. The quiet but constant role her husband played in her support is discussed in the documentary along with what it was like for the family to have her absent from them for so many years. The events around Michael’s death from Cancer in 1999 is discussed adding further weight to the sacrifices Aung San Suu Kyi and her family have made for democracy for her people. The Buddhist connection is less pronounced within this film but the subject of Aung San Suu Kyi’s Buddhist upbringing is contextualised within her political peaceful pro-democracy stance.

Finally FilmLandEmpire saw the documentary The Buddha. There have been many documentaries about the origin story behind the Buddha. However, this documentary by David Grubin and narrated by Richard Gere draws on rich cinematography of Buddhist sites along with beautiful Buddhist paintings and illustrations from around the world. The documentary includes thoughtful and well considered interviews with poet Jane Hirshfield and the comfortable company of US Poet Laureate W.S. Merwin along with well known Tibetan Buddhist scholar Robert Thurman (first Western person ever trained as a Tibetan monk and yes, father to Uma). Either as one’s first introductory or a welcomed return to the story, The Buddhais an interesting approach to the story of the Buddha from a Western Buddhist point of view and made with Western people in mind.

Let us hope that the IBFF do not wait another three years to bring the Buddhist Film Festival back to London. As with all good documentary film making, one does not need to have an interest in the actual subject matter to appreciate the films. However, if one is interested in Buddhism as a practitioner or interested bystander, any or all of the films mentioned within this film festival report would make for very interesting and entertaining viewing.
at 20:40