Captain America Vs The Armani Models 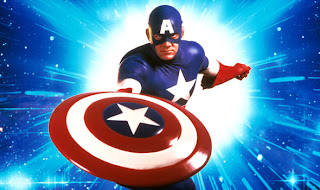 Ah, cinema in the 90's! A more innocent time. Want to make a superhero film? Have the budget of a Matlock episode? No problem! I present to you Captain America! Just as the Avengers are about to assemble in the UK later this month (or next month if you live in the US), the pinnacle in a long line of box office successes enjoyed by Marvel studios over the last decade or so, it might be worth remembering that cinema has not always been kind with the comics powerhouse. And it is none so apparent in an earlier Captain America adaptation in the early 90's.


For a long time, DC comics had taken the upper hand with such box office smashes as Superman in the 70's and its sequels, as well as the Batman franchise launched by Tim Burton in the late 80's. In the meantime, Marvel adaptations consisted of a laughable Spiderman live action film in the 70's with a baddie that looked like an insurance salesman, complete with a belly paunch, and whose plot for world domination involved mind controlling pins.  The complexity of the Marvel characters and their universe demanded bigger budgets and especially a higher technology that means only now have studios been able to do justice to the likes of Thor, Iron Man and Captain America. 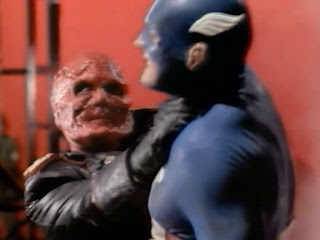 Even within the failed Marvel adaptations though that includes a Thor I am dying to see, Captain America is a UFO (an Unidentified Filmic Object). The film begins rather faithfully to the comics and last year's adaptation, with here the Stanley Tucci's scientist character being played by an Italian woman. And Red Skull is actually Italian for whatever reason. But it shifts to present times (well, the 90's) nearly straight away as opposed to last year's version. An early scene sees the hero being tied to a rocket by Red Skull (here looking like a diseased pizza) bound to the White House, and only a quick tap from his red booted foot manages to divert the rocket off its course and it ends up crashing in Alaska where he remains frozen until the 90's. A later scene in present day sees him lament his decades long slumber, archly claiming that he could have single-handedly tackled all the evils of the years he missed (communism, fascism... ).

Produced by the infamous Menahem Golan (already responsible by such 80's "classics" as Over The Top and Delta Force), the film saw its budget cut half way through filming. Already spectacularly ugly looking in its early scenes, the film was not able to offer any kind of exposition, plot development or impressive set pieces due to lack of money. So it resorted to inexplicably turning into some sort of trashy 80's Euro thriller, with dodgy accents all around and quite a few lines in Italian (as was most of the cast), as well as having the action move to Italy, which makes me wonder why it was not just renamed Captain Italy (even though shooting took place in the former Yugoslavia).

Here Captain America is a complete nelly, who would probably be scared if he bumped into me, drunk, at night in a back alley. The only interesting thing about him is that he is played by the son of cult writer J.D. Salinger, Matt Salinger. His costumer looks like it was put together by his mum thinking he was going to a kid's fancy dress party. And his only visible superpower is the "I am going to throw up carjacking routine" (I will not spoil it, it has to be seen to be believed).

Red Skull's henchman is actually his own daughter (poor Francesca Neri, fresh out of the arthouse success of The Ages of Lulu), who comes complete with an army of very good looking sidekicks, who all look straight out an early 90's Armani advert.

The baddies are actually rather badass. They manage to snatch the president out of the United States out of his hotel room, and yet the world does not seem overly concerned that the most powerful man in the world has been kidnapped. Then the last act includes a confusing subplot that I did not fully understand, but neither did the director. In some remote castle, Red Skull attempts to make an explosive piano detonate, through a device that seems as user-friendly as a rubik's cube (what was wrong with a "fire" button?").

But the world is saved (from what? We will never know), Nick Fury does not turn up at the end, there is no cameo from another Avenger and nobody assemble.

Captain America is available on DVD. It actually never came out in the cinema in the US. I suggest you rent the Joe Johnston one from last year instead.