The Girl With The Dragon Tattoo DVD Launch 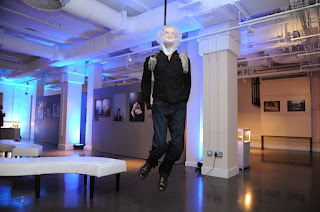 The Girl With The Dragon Tattoo (the American remake by David Fincher) came out at the end of last year as a potent antidote to the forced cheerfulness of the festive period, and while I never found the time to write a review, I enjoyed it immensely, in fact it got very close to making it to my top ten of best films of 2011. So to celebrate the release of the DVD and Blu Ray, a great event was organised by Sony at the new wing of the Film Museum in Covent Garden in London last week, a very imaginative exhibition based on the film which I was lucky enough to attend. We drank, we laughed, we looked at huge silver dildos and mannequins being strangled, and left with a glittery "temporary" dragon tattoo.


The walls were adorned with moody pictures of the actors in character that were published in various glossies at the time of the film release, mainly of Rooney Mara and even now, having watched the film, it is hard to believe what a perfect fit she became for the character of Lisbeth Salander, despite being such an unlikely candidate, due to her more wholesome turns in Nightmare on Elm Street and The Social Network. 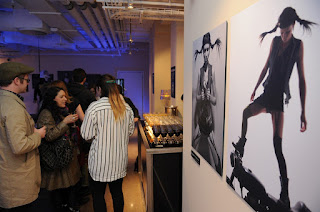 Also on display, a few of the, aherm, objects and props from the film, in particular one that you cannot fail not to recognise, an object that Lisbeth uses to enact her revenge on her sleazy legal guardian. Ouch.

If you have seen the film, chances are you remember the fantastic CGI opening credits that had everybody talking about when the film came out, which looked like a vintage James Bond credit sequence if James Bond mission took him to some S&M leather club owned by Wired. A making of this sequence was also projected and proved a fascinating insight into its creation. 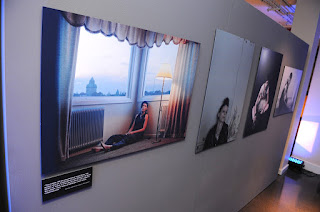 Cleverly, an effort had been made to make the experience more immersive for those who had already seen the film, with various press cuttings from within the film, a Vanger family tree and the iconic dried leaves which played such a pivotal part in the story. 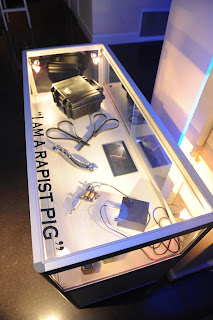 The Girl With The Dragon Tattoo is out in DVD and Blu Ray. This exhibition actually made me want to watch it again to see if it passes the test of a second viewing, but if you have not seen it yet then I wholly recommend it. And let us use this opportunity to watch its fantastic trailer.